Introduction - The Thames - a Secret Waterway!

William Shakespeare: (lines attributed to) in 'The Life of the Lord Cromwell' -

The River Thames, that by our door doth pass,
His first beginning is but small and shallow:
Yet keeping on his course, grows to a sea.

Sir Walter Raleigh at the court of Queen Elizabeth I -

There are two things scarce matched in the Universe -
the sun in heaven and the Thames on earth!

For any matter connected with this site click Messages above and send a message either public or private.

To navigate around this site click a link in the title section above
or click one of these icons: hover over the icon to see what it does.
OR: you can just step through all 250 odd pages in sequence - Scrolling to the bottom of a page automatically finds the next upstream.

[SPACE] may scroll down one SCREEN; F11 toggles that FULL SCREEN experience - on and off

The Thames is a secret waterway through the heart of England, accessible only to those with a boat, or willing to hire a boat, or to some extent those willing to walk the Thames paths.

It is very slow, generally understated, a gentle, plain, beauty with few dramatic points. There are no rapids or waterfalls, and the beauty which takes your breath away is generally of trees on the hills at which the river nudges in an undemanding sort of way.

Above Cricklade the Thames flows through flat water meadows from the source at Thames Head, though the Churn is rather more exciting with lovely scenery up to Seven Springs.

From Cricklade to Oxford the countryside is essentially flat and gentle and there are so few people to be seen that any human contact becomes quite welcome.

From there on down the scenery slowly becomes more dramatic reaching its height below the Goring Gap. Other beauties include Hennerton backwater and the Cliveden Reach.

Slipways or other launching sites have been identified enabling the whole navigable river to be used for day trips by trailered or car topped boats.

All but the Lechlade - Cricklade section, the River Cherwell, the Bullstake Stream and Hennerton Backwater, would be suited to small powered boats, but the site was written from a punter's point of view.

1923: "Father Thames", by Walter Higgins, has these delightful Thames sketch maps. But Walter Higgins couldn't make them interactive - and I have! Click for a description of any place for which a tooltip appears - 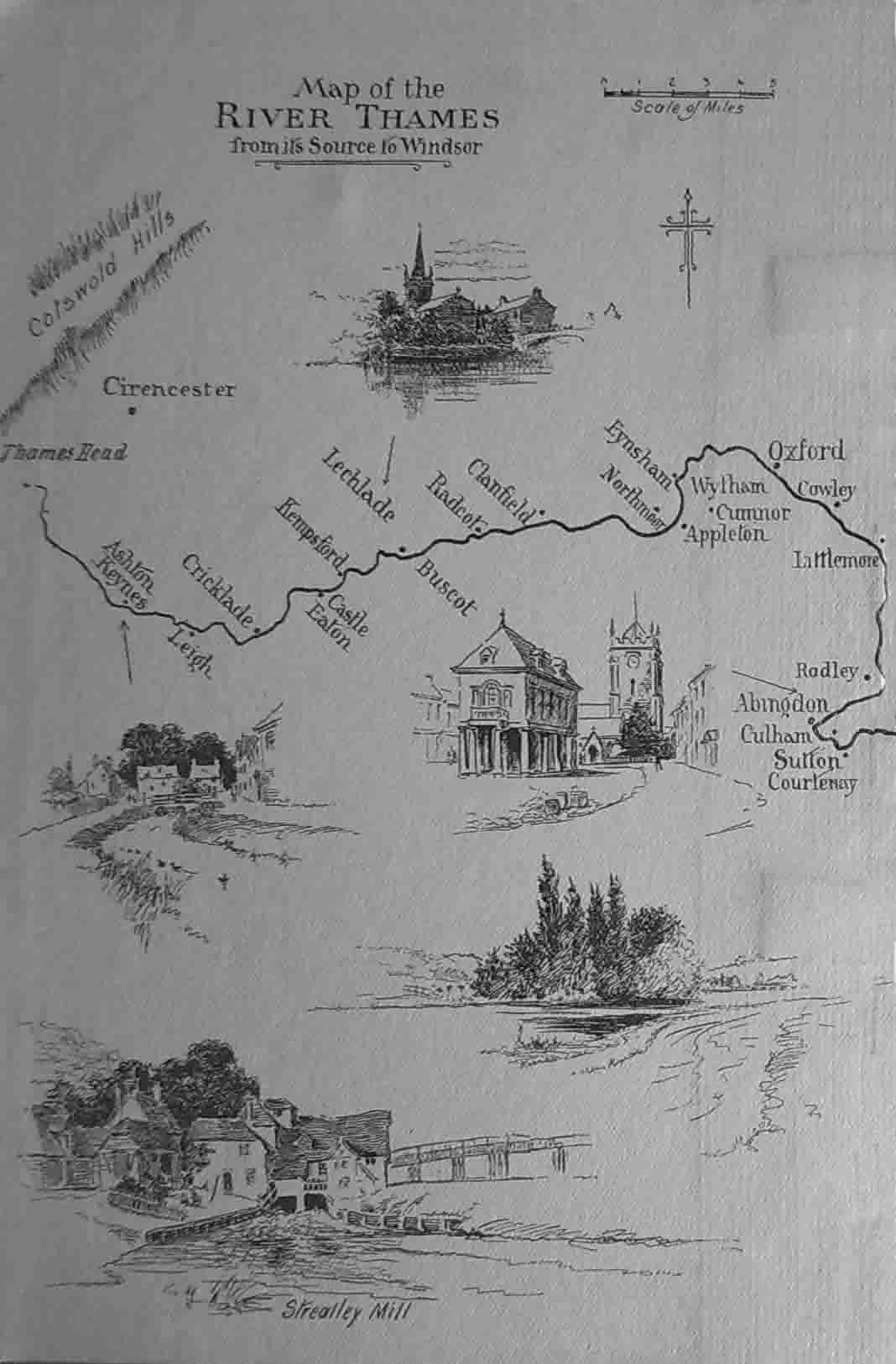 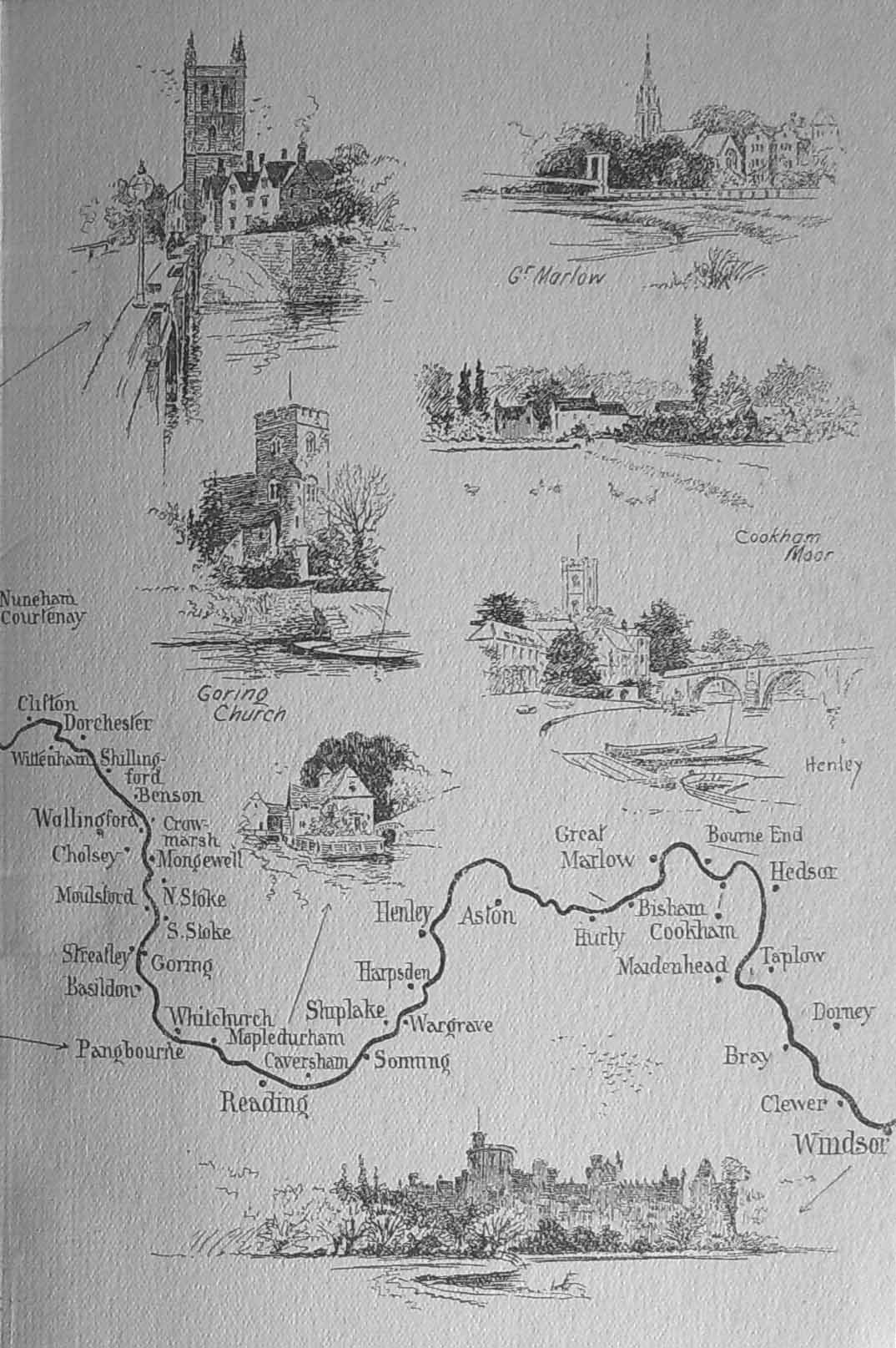 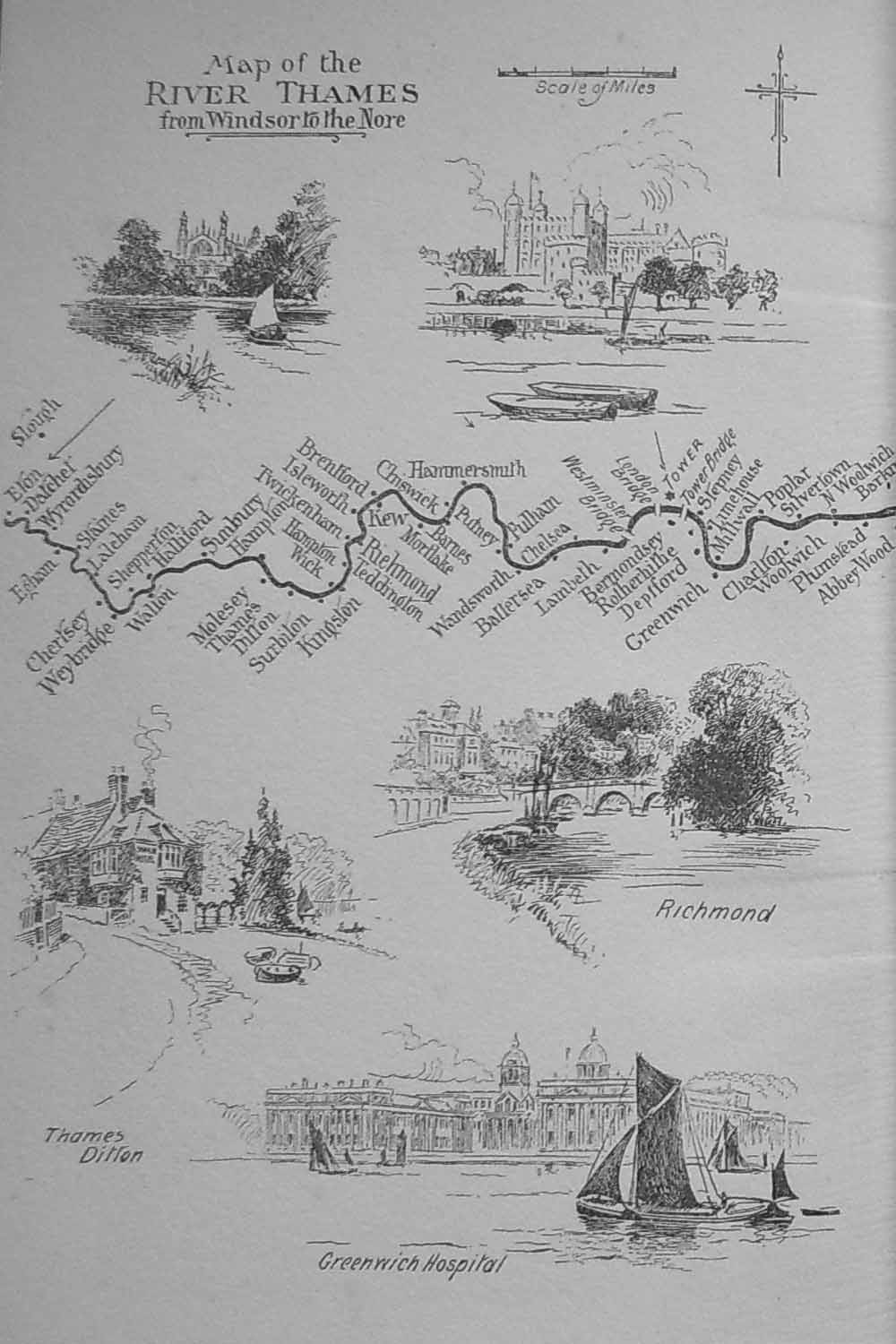 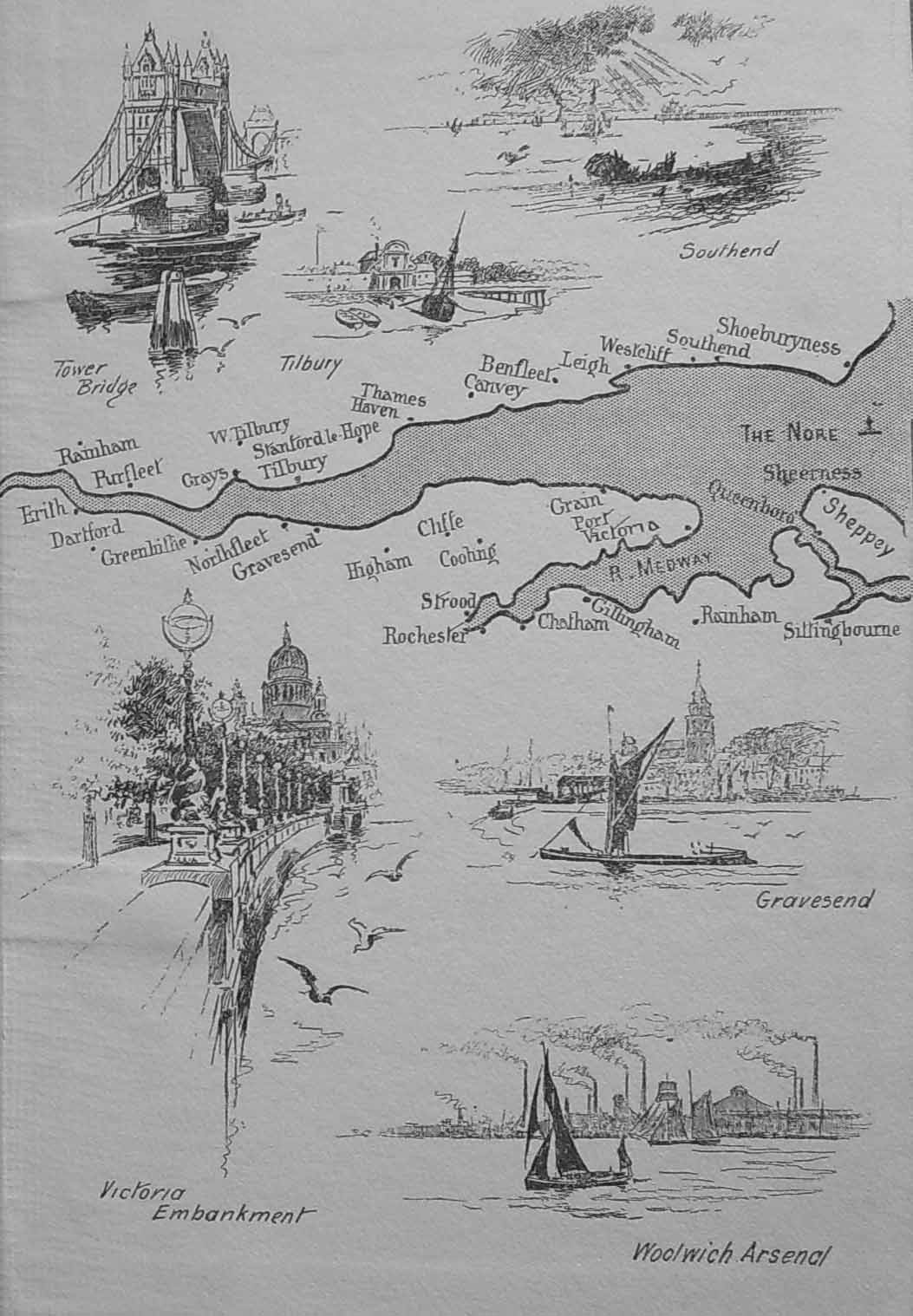 
This Site is full of Poetry

1844: The title is quoted from the poem by Joseph Tubbs, on the Poem Tree, Wittenham Clumps.
Many of the more significant poems can be heard.

This site is full of quotations

I cannot get away from it that the Thames may be alive!

We English cannot boast about the greatness of our rivers that is, about their greatness measured coldly in miles either of length or width. Nor do we. We do not seek to match our Thames with Amazon, our Mersey with Mississippi, our Severn with Zambesi. These could swallow our rivers, hardly accounting them rivers, almost our country even and scarcely know the difference.

We have no imposing deltas, no thunderous cataracts, no perilous rapids. But if they are no giants, our rivers have personality and character. They are very much a part of our lives, almost of ourselves.

And the river itself means the confluence of many brooks near Coates, on the edge of Gloucestershire, below Cirencester.

It means Isis above Dorchester where the Thame flows into it and Thame and Isis are one name and one river thereafter.

It means the dividing line between Berkshire and Oxfordshire, Berkshire and Buckinghamshire, Middlesex and Surrey, and then at last Essex and Kent.

It means Oxford and Reading and Windsor, Pangbourne and Henley, Putney and Mortlake, London.

How much of England is in those names? What would be left if all that is and has been on those two hundred miles of river-banks were swept away out of our lives, out of the past?

This site is full of historic pictures

I acknowledge gratefully permission to print many copyright pictures and poems and other items. I have no commercial interest in any of them.
This site is for personal study and education, to enhance the enjoyment and knowledge of the River Thames, and may not be used for any other purpose.

Doug Myers has painted all the bridges of the Thames. His pictures are copyrighted by him. Doug has been very co-operative in helping me use his pictures.

The Frith photographs are historically important and copyright - my grateful thanks for permission to show them.

The MOTCO Pictures from various 18th and 19th century works are reproduced by permission.

The aerial photos by LAST REFUGE are great. Wouldn't you like to fly round the country taking photos like that?

The captive balloon photos by Skyscan are fantastic! They can sell you a copy of "The Secret Thames".

Oxfordshire County Council Photographic Archive have kindly allowed me to reproduce their photographs.
Other permissions gratefully acknowledged from:
Panteek Antique Prints
My own pictures are copyright 2012 John Eade (send me a message to use one)

Other quotations and pictures are from books no longer covered by copyright but if I have inadvertently been mistaken in any particular please forgive me and let me know!

The first time you go by boat from London to Lechlade it is an Odyssey.
The second time it is an adventure.
The third time, and thereafter it is Green Content.

I have invented a time machine. It looks like a punt, it floats like a punt, but on the River Thames it carries me back, sometimes a thousand years. For the Thames is liquid history. Mysterious river, always changing.

Down the entire length of the Thames, almost without exception, every weir and bridge and church has origins traceable to the middle ages and before.

In finding out about them I have collected dozens of books about the river and immersed myself in them. And this now is my summary of what I have found related to the river as I have punted it, three times down the entire puntable length.

I have covered the freshwater Thames from Teddington to Thames Head and Seven Springs, and also the Oxford section of the river Cherwell and the Bullstake Stream.

For completeness I have also added a Tideway section though I have no personal experience of it.

It is, in places, also a personal view of the river with some of my own photos taken with one hand, with a punt pole in the other hand. In many of them the front of the punt appears in the frame.

But it is largely quotations and pictures and prints from the many authors and painters who have appreciated this great river.

I am an enthusiast for poetry and though there is a persistent refrain that the great river poem has yet to be written nevertheless I do love much of what has been written and have included almost every river poem I can find at the most appropriate place.

I have avoided going on about wash and engine noise and litter and notice boards - I simply leave that to George Leslie and Jerome K Jerome - they make the point far better than I!

A licence is needed in order to navigate even a manually propelled boat on the Thames. Click here

This site starts from the Estuary and goes towards Cricklade, going UPSTREAM.
However, throughout, "left bank" and "right bank" have been used from the conventional point of view, FACING DOWNSTREAM. This is the usual convention and causes immense confusion if it is not adhered to.
1859: All the Year Round by Charles Dickens -

The right and the left banks of rivers are distinguished by turning your back on their source and facing the point where they discharge themselves into the sea.

Supposing the Thames to be the river in question ; you stand on Westminster-bridge and look towards Margate : Lambeth will be on the right bank, the city of Westminster on the left.


Tamas Reaches, by Jenyth Worsley, May 2003,
by kind permission, www.riverthamessociety.org.uk/poetryc4.htm

Near the railway bridge on the road to Cirencester
you pass a sign which says, Source of the River Thames.
Its underground spring comes up for breath
through banks that are hardly higher than the water.
Trout are here, otters and water voles.
Take the meandering rivers path through Lechlade,
whose stone-built houses keep their hidden views,
until, near Oxford, wider waters offer
residence to house-boats, fishermen and geese.

The old Thames sang of rotting wood and skulls,
barbyl, flounders, spearheads, bits of rope.
Its pre-Celt name was Tamas, dark river.
At this forum of city stone and water
the old trades are gone. Docks and wharves,
where two thousand masts once glittered on the water
with cargoes of tea and sugar, silk and oranges,
and steamers to the Empire bruised the oceans
with holds of steel and missionary trunks
all are transformed by the new commerce,
the new river gods, Finance and the Media.
Below their elegant glass powerhouses
sailboards catch the wind
and wine and coffee bars displace
oyster and apple stalls

I shall speak of the river as occasion presents, as it really is made glorious by the splendour of its shores, gilded with noble palaces, strong fortifications, large hospitals, and public buildings; with the greatest bridge, and the greatest city in the world, made famous by the opulence of its merchants, the increase and extensiveness of its commerce; by its invincible navies, and by the innumerable fleets of ships sailing upon it to and from all parts of the world.

As I meet with the river upwards in my travels through the inland country I shall speak of it, as it is the channel for conveying an infinite quantity of provisions from remote counties to London, and enriching all the counties again that lie near it by the return of wealth and trade from the city; and in describing these things I expect both to inform and divert my readers, and speak in a more masculine manner, more to the dignity of the subject, and also more to their satisfaction, than I could do any other way.

This list does go on a bit - you might prefer to start looking at the river pages themselves!