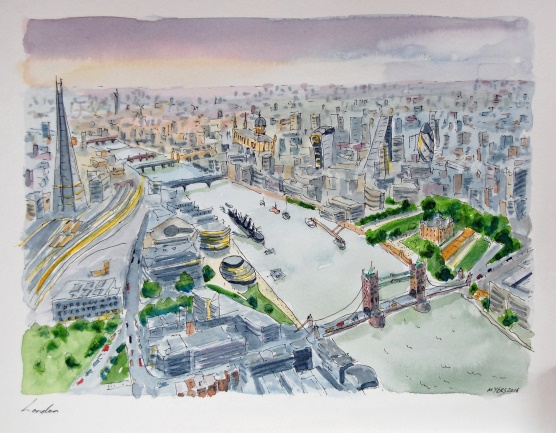 Tower Bridge is younger than it looks. That was built-in to the design, which was intended to match, but not compete with, the Tower of London.
1870: Some fifty schemes for a crossing here were examined including a free ferry as at Woolwich.
The subway built in this year, should not, it was decided, include a giant under river arcade of shops.
1878: This rejected rather quaint but essentially complete design was Sir Horace Jones' first attempt. It appears to use a cable lifting system. 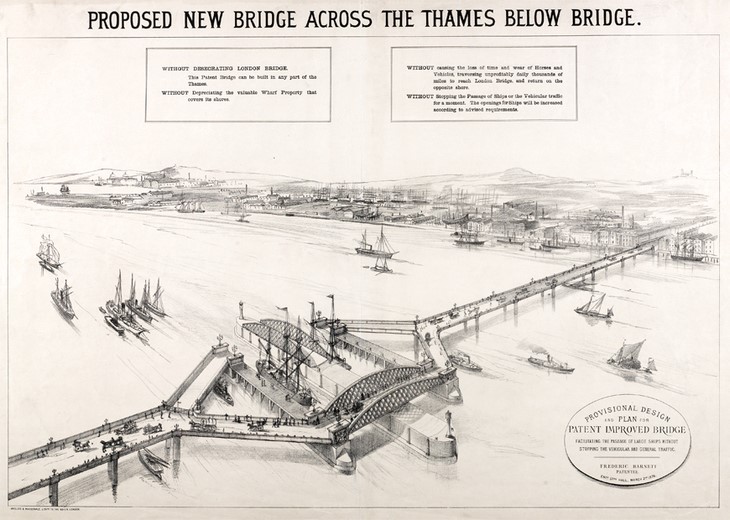 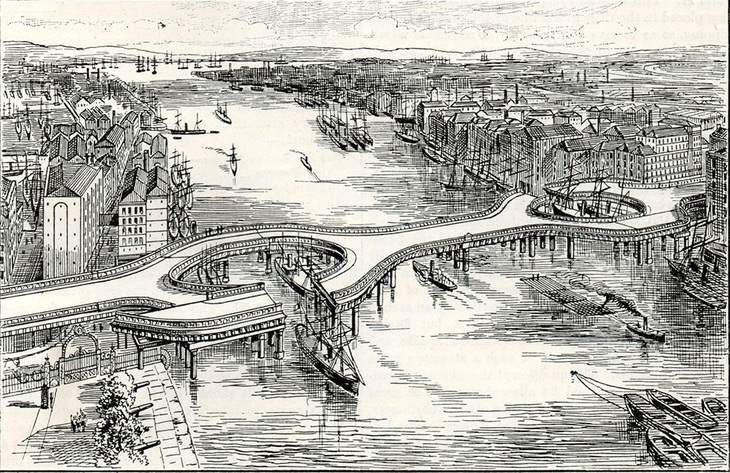 Queen Victoria was not amused -

... to those who say the bridge will increase the defensive strength of the Tower and improve the beauty and historical associations of the place all I can say is "Bosh!"

1892: Photo of Tower Bridge under construction. The design had to keep the river unobstructed during the building period, and it was desirable that the roadway should be no higher than bank level. This ruled out a stone bridge because of the timber supports required below the arches whilst the stones were positioned, and also the clearance for large ships would be impossible.

View from top of the southern tower of the new bridge before it was opened.


Tower Bridge view of Tower from top of southern tower before the bridge was opened, 1894

The day was glorious, the sun hot enough to raise a tremulous golden haze over river and land, the breeze brisk enough to keep colour sparkling and the landscape clear. Mr Wyllie found here all that his heart could desire - the close-packed flotilla of shipping, the race of the mighty river tide, the avenue of unpaintably brilliant and varied flaunting bunting, which led up to the mighty bridge standing white midstream in the westering sunlight, and the great fleet of craft of all sizes and rigs, headed by the Admiralty yacht Irene, passing under its vast uplifted arms. Here was a subject for an historical painter, and in that sense he has conceived and executed it. 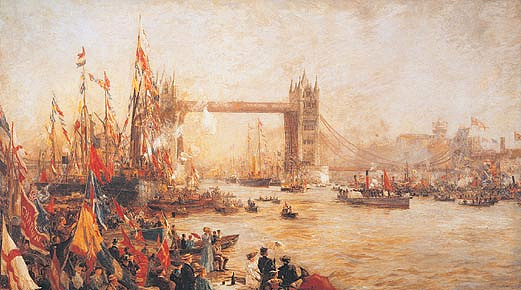 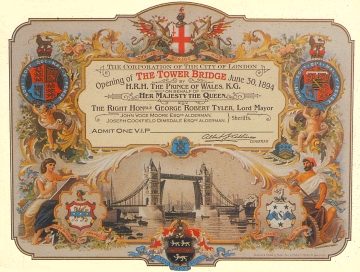 And at that very moment with the royal coach on the bridge this drawing was pictured: 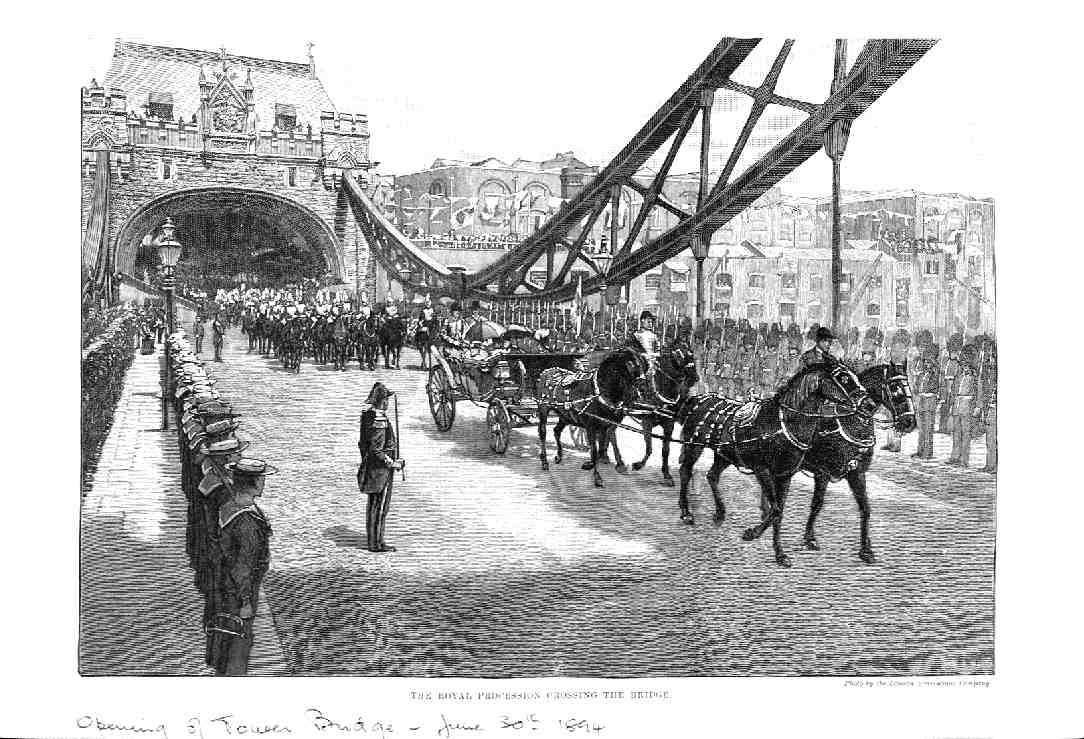 Known as 'the Wonder Bridge'
1894: Tower Bridge opened to traffic. It has a double drawbridge (bascules) to enable tall ships to pass into the Port of London.  The machinery was steam-driven. The high-level walkways were built as a result of the Act of Parliament giving permission for the construction of the bridge specifying that there should be access to the public at all times. When the bridge was first built it needed to open approximately 22 times a day but this is now reduced to about once or twice a day and of course on special occasions. The original design was by Sir Horace Jones assisted among others by Isambard Kingdom Brunel.

"the most monstrous and preposterous architectural sham that we have ever known." 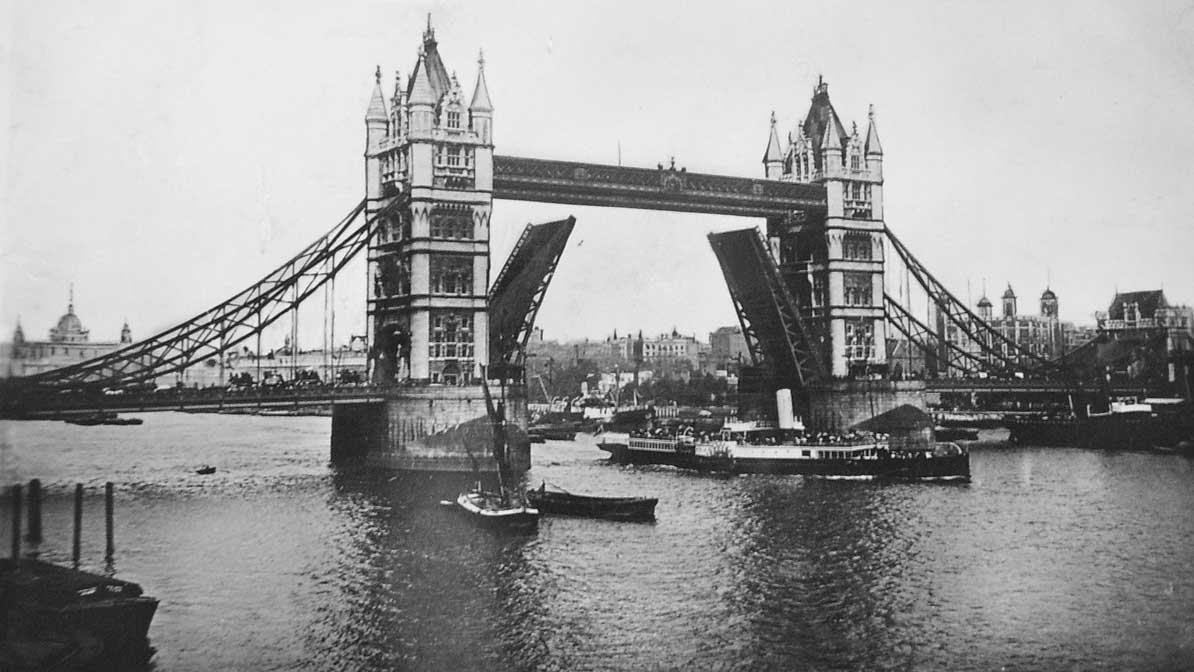 TOWER BRIDGE: Over the Thames, from the eastern boundary of the Tower to Southwark, parish of St. John Horseleydown (O.S.). Erected by the Corporation of the City of London at a cost of over £1,000,000, 1885-94. Designed by Sir Horace Jones and Wolfe Barry. Half a mile long. Southern Approach opened 1902, Northern Approach carried out 1907. 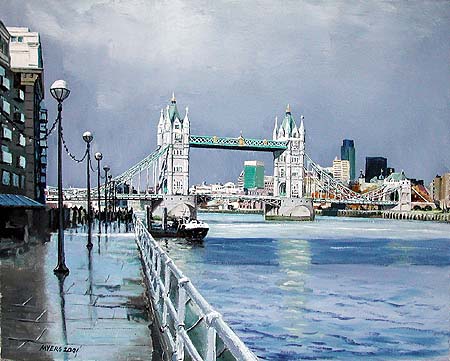 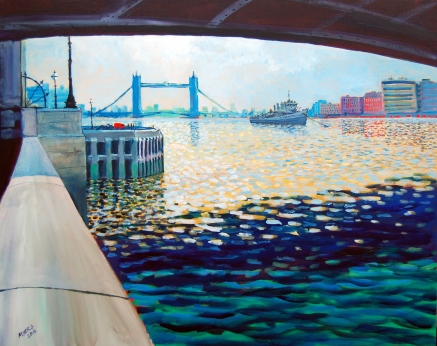 Alisdair MacDonald (1940-2007) set up his camera on London Bridge (with Tower Bridge in the background) between noon and one o'clock and photographed every vessel that passed in the hour. He then created this composite image to show how busy the Thames really is! -