... on the Middlesex Shore, begins the long Town of CHELSEA, where are many good Buildings, but they are chiefly occupied by Boarding-Schools, or Lodgers. Here is also a good old Palace belonging to the Bishops of Winchester, another belonging to the Duke of Beauford, another to the Duke of Ancaster,
and a fourth, formerly the Seat of the Earl of Ranelegh, but now converted into a Rendez-vous for the Musical and the Gay; a splendid Amphitheatre built in the Gardens, in the Form of the famous Rotunda, once the Pantheon at Rome, where Conserts of Vocal and Instrumental Musick are performed, almost every Night in the Summer Season.

1760:  A Prospect of Chelsea Bridge Waterworks - A Prospect of Chelsea Bridge Waterworks, 1760

1760: The above fascinating print is not all it appears. I think it should really be entitled "A Prospect of Chelsea Waterworks Bridge". Though the original is understandable when you realise it was the only Chelsea Bridge at the time! It was not over the main stream, but over what appears below as the Grosvenor Canal. The bridge in question is clearly marked as Chelsea Waterworks Bridge on the map below.
There appears to be a weir. The water is rushing down a slope at the bridge. Notice the small boat with two occupants clinging on grimly to the far bank. Were they attempting to go upstream? 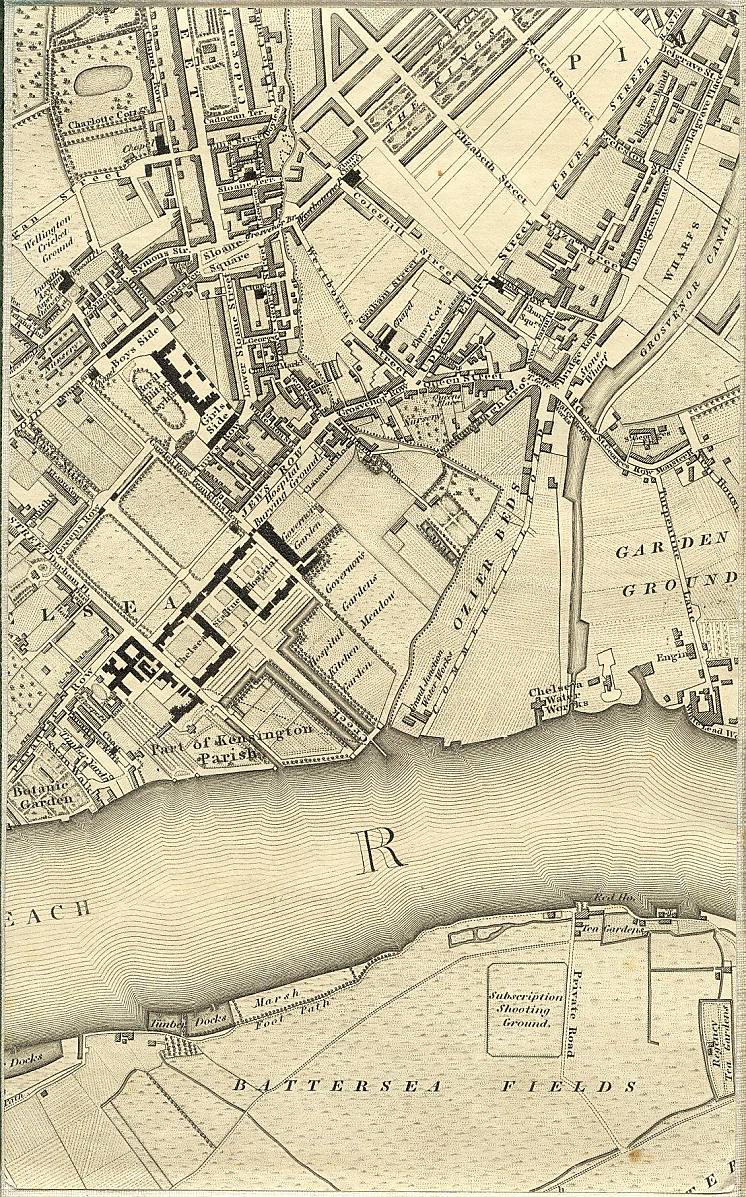 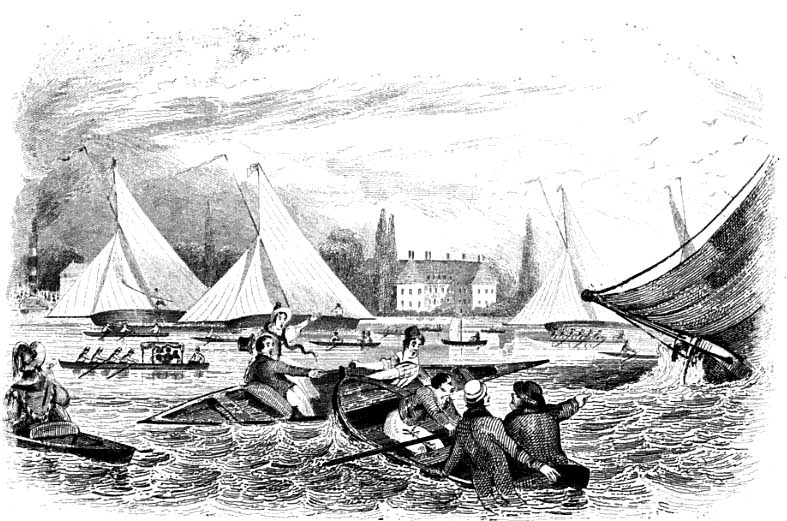 1851: Work began on what was known as "Victoria Bridge", designer Thomas Page.
A suspension bridge built very much on the same lines as the first Hammersmith Bridge by Tierney Clarke.
[See also Marlow Suspension Bridge - the only surviving work by Tierney Clarke.]

... a fair structure, with its beautiful towers gilded and painted to resemble light coloured bronze and crowned with large globular lamps diffusing sunny light all around. 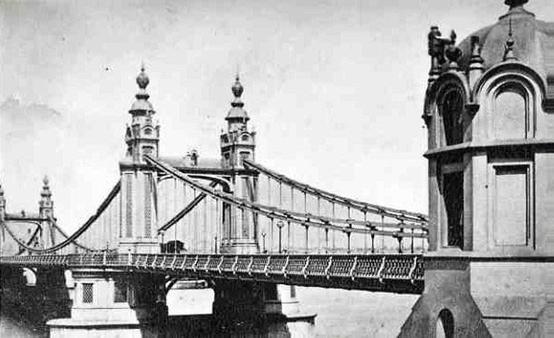 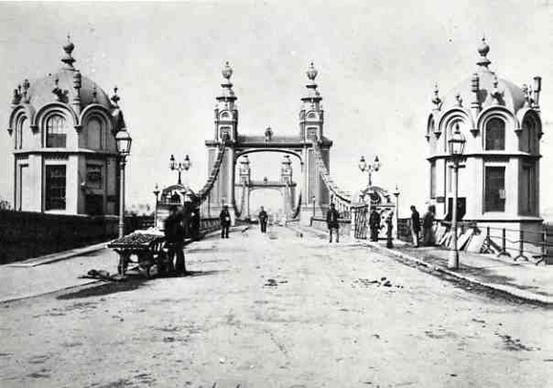 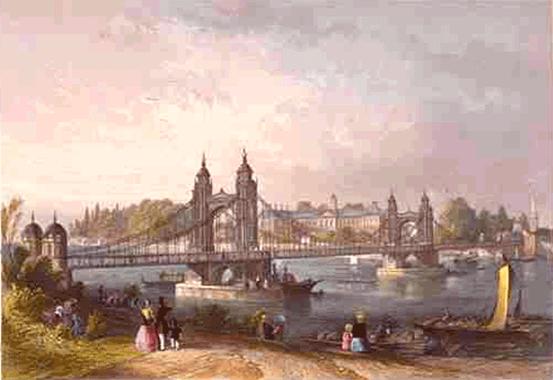 This, unlike other bridges, was a government bridge, built to provide access to the new Battersea Park and the growing suburb of Battersea. £80,000 was borrowed at 4% by the Office of Works to finance its construction, and by the time it was opened unpaid interest had raised the debt to £98,777. The excess of toll revenue, £4,642 in the years 1859-69, over the cost in those years of toll collection, repairs and maintenance averaged only £1,494 , only fractionally over 1.5% of the debt. Toll revenue in the years 1873-5 averaged £5,960 and by 1876 the debt had fallen to £13,000. In 1879, the Metropolitan Board of Works paid £75,000 for the bridge. Thus government lost money on the bridge; whether or not the bridge was intended to service its debt, it failed to do so completely.

1879: Tolls abolished on what was now known as Chelsea Bridge.
1880: Bridge strengthened with additional chain.
1885: Dickens's Dictionary of the Thames -

Chelsea Suspension Bridge is another work by the designer of Westminster Bridge ...
It was made in Edinburgh, and set up in its present position in 1858 at a cost of £80,000. 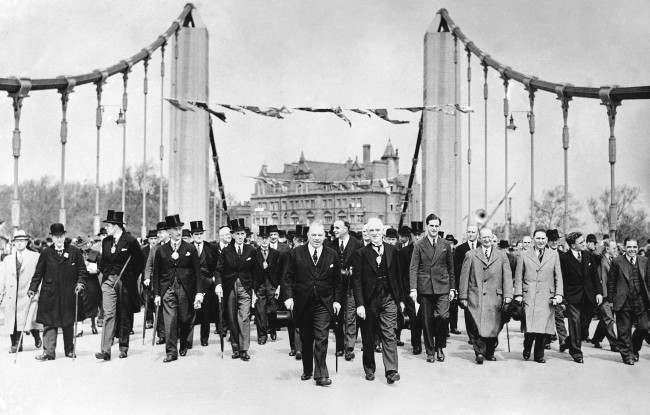 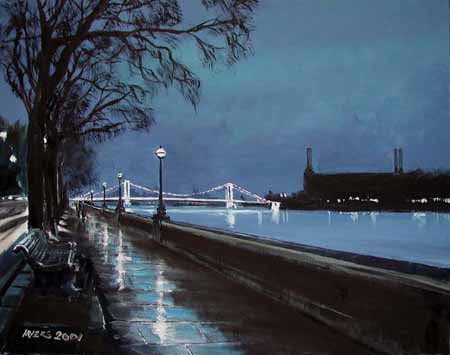