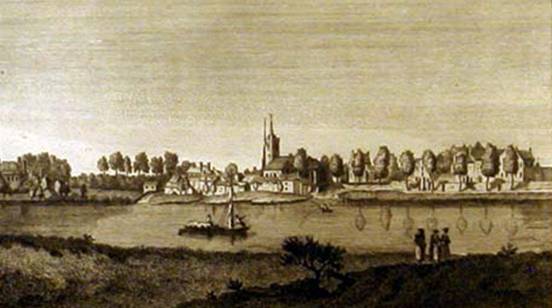 MORTLAKE, in Surry, is a long Town, close to the River, containing many good Buildings, well inhabited by Gentlemen and Merchants.

Until 1930s: Chiswick to Barnes Ferry 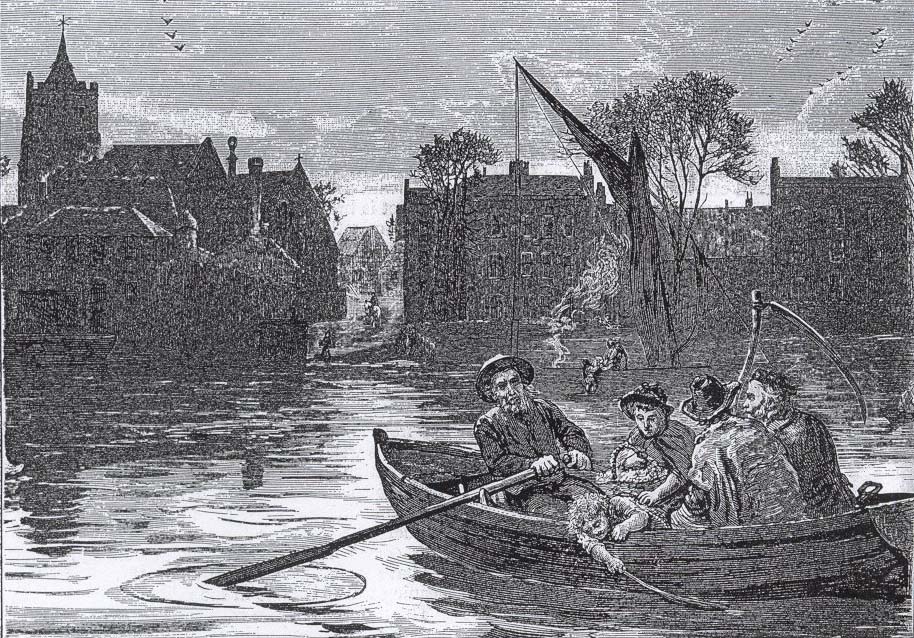 [ Just imagine what Terry Pratchett could do with that picture!
Death with his scythe is staring somewhat worryingly at young master innocent who is leaning right out of the boat ...
His mother is worried - but the boatman (Charon) has seen it all before.
Meanwhile on the far bank a being from another part of the multiverse has just taken over a tree and weird emanations are descending on the children playing beneath it.
I wonder what happens next ... ]

Grey Thames at flood in balance swung,
Grey gulls scared mewing overhead,
The chill grey wind a requiem said,
And over all the grey sky hung.

Grey ghosts of memory paced with me
As down to Mortlake slow I went;
Grey brooding, grey presentiment:
A grey and cheerless company.

Then looking backward up the stream,
Within the bridge's sombre frame
Of iron piers a vision came
That seemed the fabric of dream.

The little leaning Strand, where rest
Old barges when their work is done,
A sudden glory of the sun
Lit, like an Island of the Blest

Ethereal on my wondering sight
It flashed from out a golden mist;
To fire its scarlet roofs were kist,
Its walls and road a curve of light.

To Mortlake then I took my way
With kindled soul and quickened will:
A touch of sun brought gold from ill;
A gleam from God gave gold for grey.

The refurbishment work is the first major operation on the bridge and will extend its life span by 60 years.
Work includes: Restoration of key heritage features; Strengthening of parapets; Restoration and improved access of steps to and from the riverside, including lighting; Installation of new segregated cycle lane; Installation of energy efficient heritage lighting to restore the bridge to its original look; Waterproofing; Concrete and masonry repairs; and Surfacing.
Chiswick Bridge is a Grade II listed bridge located on the A316 arterial route into London, and is a strategic River Thames crossing. This bridge is a 4-lane carriageway used by 40,000 vehicles, hundreds of pedestrians and cyclists each day. The bridge also provides an excellent vantage point for public river events and attracts large crowds, most notably for the prestigious annual Oxford and Cambridge University Boat Race.
During its 52 week construction programme, only three planned weekend closures of the bridge were required to carry out essential works to the bridge expansion joints and to resurface the carriageway. The works were carefully planned and managed around bridge users, and rigorous safety measures were put in place to ensure safe working for the operatives and safe access for members of the public.
To ensure minimal disruption, lane restrictions were kept to a minimum, and lane reductions only during off-peak times. All work activities were co-ordinated to prevent delays and disruption to the London road network and the River Thames.
Chiswick Bridge is a popular viewing point for the prestigious Oxford and Cambridge University Boat Races. The construction programme was developed in collaboration between TfL, BAM Nuttall, supply chain partners and all third parties and stakeholders to ensure the works were completed in advance of the 2015 Boat Race, so the public could enjoy the race from Chiswick Bridge as tradition.
Improved Safety:
The new lighting columns have been positioned closer to the bridge parapets, creating a cycleway which is now a suitable width and without any street furniture or obstacles, creating an enhanced cycling experience for users. Likewise, pedestrian flow is now segregated and an increase in pedestrian flow is expected due to the safer, dedicated footways.
As Chiswick Bridge is a Grade II listed structure, the design of the parapet strengthening had to provide the necessary degree of vehicle containment whilst maintaining the heritage look. A stainless steel skeleton was used within the stone elements. Chiswick Bridge is the first in the UK to use this method to provide full containment in the event of an incident, whilst limiting the impact on the heritage value of the structure. 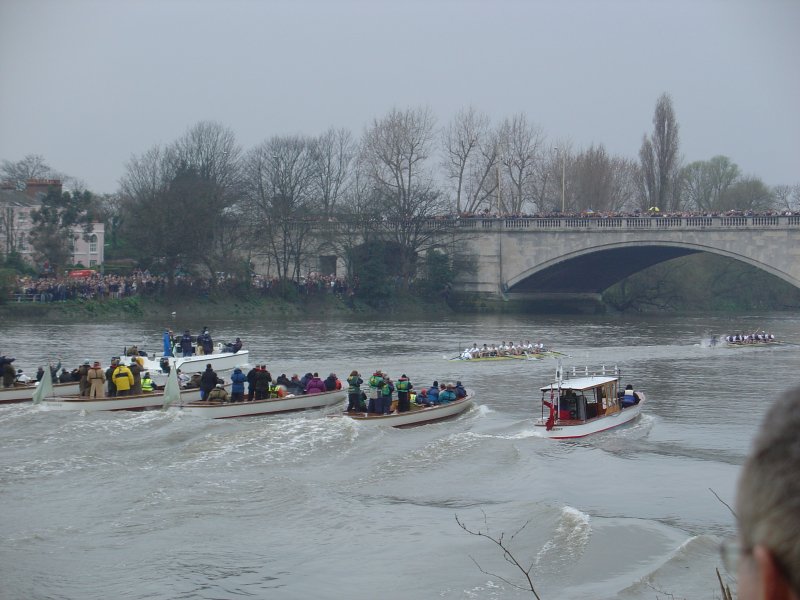 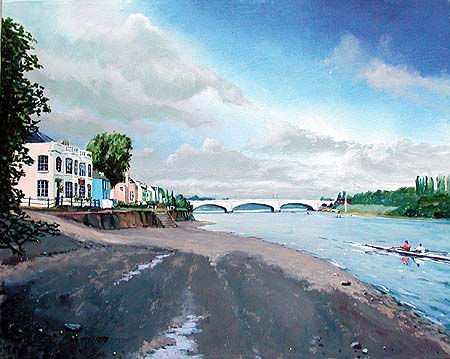