Port of London Authority, Notices to Mariners U24 of 2009, Rules for Navigation of Vessels under Oars on the Tidal Thames:

Kew Road Bridge and Pier
The visibility on the bend in the vicinity of Kew Bridge is particularly restricted and passenger boats regularly manoeuvre on and off Kew Pier. All craft are to navigate with extreme caution in the area.
Power driven vessels are reminded to sound one prolonged blast when approaching the bridge from either direction (International Regulations – Rule 34a) and when leaving Kew Pier (PLA Byelaw - 36). All vessels are to listen carefully for and be guided by the sound signals.

As soon as you leave Brentford, you enter a Number of Houses near the Thames, called, STRAND-ON-THE-GREEN where many Merchants and Gentlemen have their Houses; but is chiefly inhabited by Fishermen; and who have long been, and now are, more remarkable, than at any other Place, in their illegal Fishings, &c

Before 1759: Kew Ferry
1759: First Kew Bridge built by Robert Tunstall, opened in June. It had eleven arches of which four were of stone and seven of timber. Three thousand people used the bridge on the first day, each paying a penny toll.
1760: Prince George, riding from Kew Palace across Kew Bridge met a messenger and heard the news that George II was dead and that he was King George III.
1783: A new stone bridge with seven arches was begun.
1788: In the great frost, which began in November and lasted seven weeks, a sheep was roasted whole on the ice east of the nearly finished bridge.
1789, September: The second Kew Bridge (1789-1903) by James Paine, was opened.

THE present handsome stone bridge at Kew, from a design of the late Mr. Payne, is in its construction simple, yet elegant, and does credit to the skill of its architect.
THE form of this bridge is much hurt by the necessary addition of so many brick arches at either end, particularly those which have been occasioned by the marshy situation of this shore on the Surry side.
It was erected nearly parallel with the old structure, which did not stand more than thirty years, the act of parliament having passed for its building in 1758.
The present bridge was opened for carriages, &c. on the King's birthday, the 4th of June, 1790.
THE advantages of the Kew bridge tontine, which has been established only a few years, I am informed are so great as to produce a net interest to the last class of subscribers, of more than nine per cent. 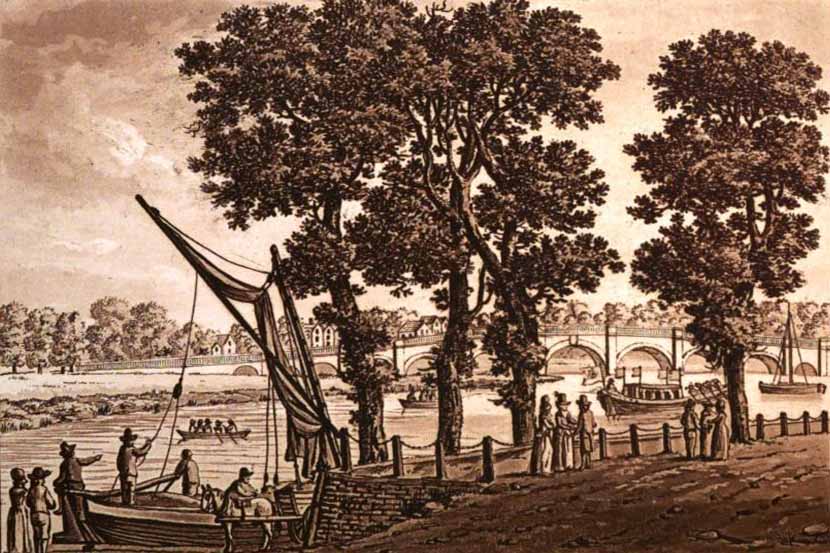 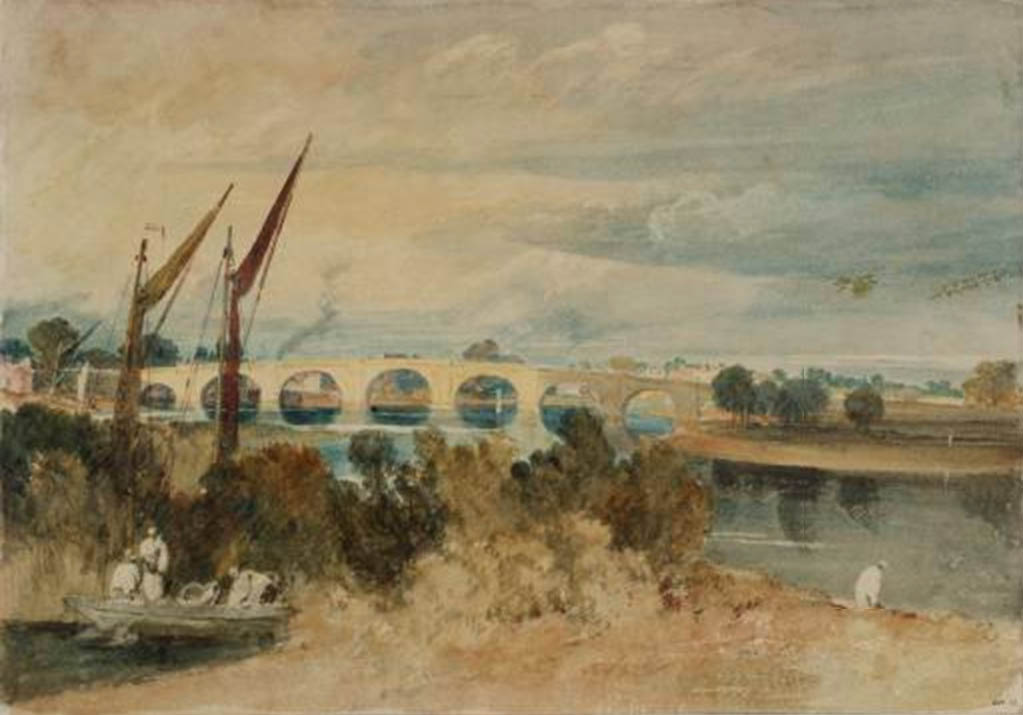 Kew Bridge, with Brentford Eyot in the Foreground and Strand-on-Green Seen through the Arches: Low Tide 1805
Turner 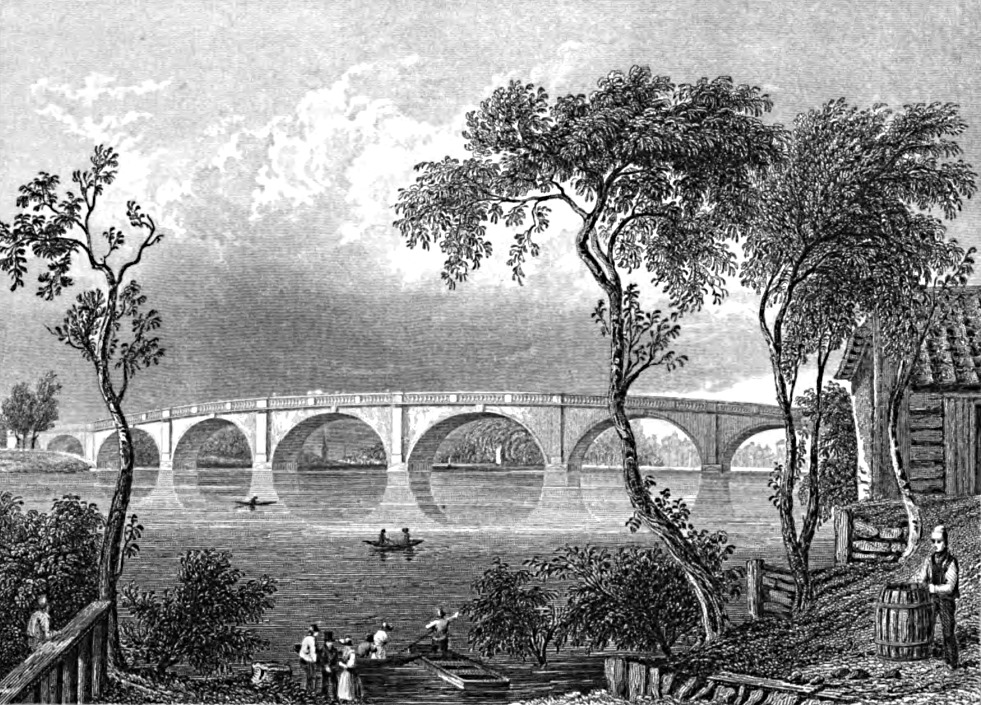 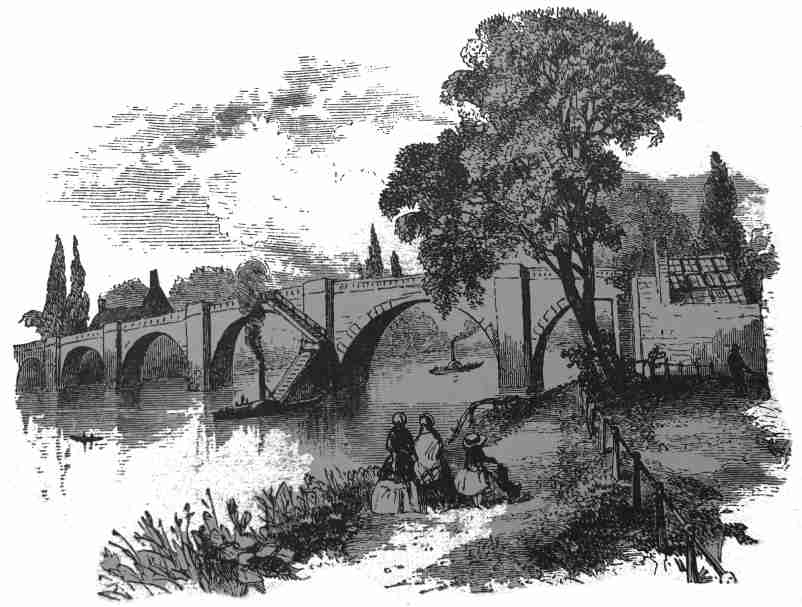 The Bridge at Kew is a comparatively modern structure. Looking eastward [actually westward to Brentford Ait] a pleasant ait fortunately takes away from Kew and its river walks the view of "Brentford's tedious town." 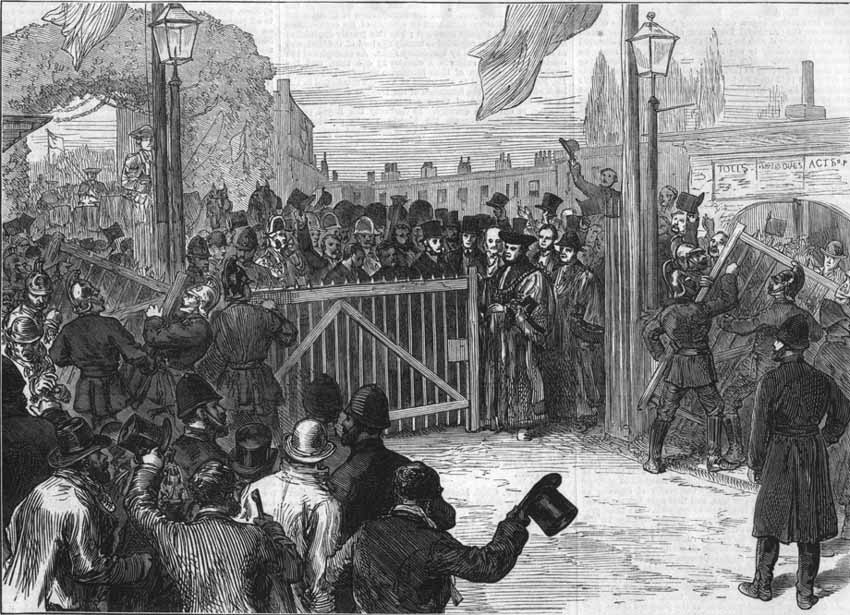 FREE OPENING OF KEW BRIDGE
The well-known stone bridge of seven arches over the Thames at Kew, which was built above eighty years ago, [started 1783, opened 1789] is now open to all passengers free of toll.
The opening ceremony took place on Saturday last. It was attended by the Lord Mayor and Sheriffs of London, and by Colonel Hogg, M.P., official chairman of the Metropolitan Board of Works. This bridge was private property, vested in trustees, and is the fourth bridge across the upper district of the Thames that has been emancipated within the last few years, mainly by the application of the coal and wine dues of the city of London and the metropolis; the trustees in this case receiving, by way of compensation, £57,300.
Kingston Bridge was the first that was freed from toll, in March, 1870, when the venerable Lord St. Leonards, then in his ninetieth year, rode on horseback in the procession, as High Steward of the manor of Kingston. Since then the bridges at Walton and Staines have been emancipated, and it now only remains to free the bridge at Hampton to complete the work in the upper part of the Thames. The watchword in the surrounding districts has of late been Free bridges for a free people, which on Saturday was displayed on banners. It is due to Mr. Gould, now an Alderman and formerly Mayor of Kingston-on-Thames, to state that he has taken a conspicuous part in aiding the movement from the first, co-operating for that purpose witch a committee of aldermen and burgesses in that town. By a bill introduced by the Government in May, 1868, it was originally intended to continue the coal and wine duties until 1889 for the purposes of the Thames Embankment and certain City improvements; but that being strenuously opposed by the inhabitants of districts bordering upon the Thames, as the bill then stood, a clause was inserted to the effect that the duties should be applied in the first instance to the freeing from toll the five bridges of Kew, Kingston, Hampton Court, Walton, and Staines; and in the following year another Act passed empowering a joint committee of the Corporation of London and the Metropolitan Board of Works to give effect to the provisions of the Act of the previous Session in appropriating the funds derivable from the coal and wine duties in the purchase of the interest in the bridges in question, and throwing them open to the public.
Before the ceremony, on Saturday, there was a procession of the Lord Mayor and Sheriffs, in their state carriages, from the Gunnersbury station into the village of Kew. Colonel Hogg was with the Lord Mayor; the procession included the members of the joint committee and of the local committee, all in open carriages.
The line of route was filled with people, and the windows on both sides were crowded. The approaches to the bridge were spanned by triumphal arches, composed of evergreens, and banners floated from both sides throughout the entire length. The Lord Mayor and Colonel Hogg, with the Sheriffs, arriving at the northern entrance to the bridge, they alighted and were received by Mr. Mason, chairman of the trustees. Advancing towards them, Mr. Mason handed the Lord Mayor a finely-worked mediaeval key, highly polished, and ornamented with masonic emblems.
The Lord Mayor asked Mr. Mason if he and his co-trustees had received the purchase-money for the bridge, £57,300. A reply having been given in the affirmative, the Lord Mayor, amid rounds of cheering and booming of cannon, unlocked the gate.
The fire­men rushed forward and, raising the gate from its hinges, bore it in triumph to a brewers dray, decked with evergreens and flowers, and drawn by a pair of white horses, driven by a man in a red cap. The firemen having mounted the dray, which became a conspicuous object in the pageant; the journey was continued along the bridge, amid salvos of artillery, and round Kew-green, returning eventually by the bridge to the Star and Garter, at the north end, where a luncheon awaited the chief persons who had taken part in the ceremony. ... In the evening there was a display of fireworks. 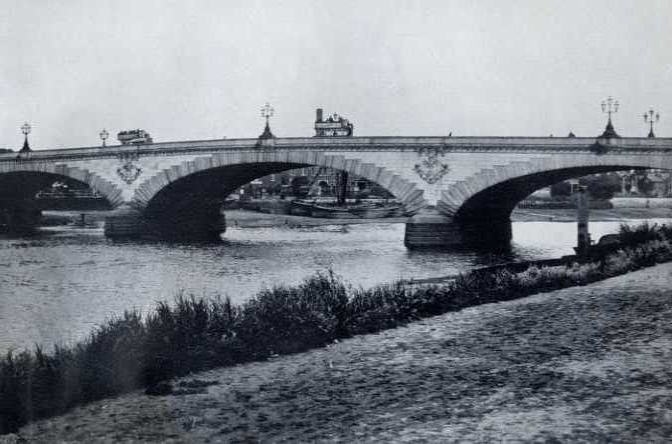 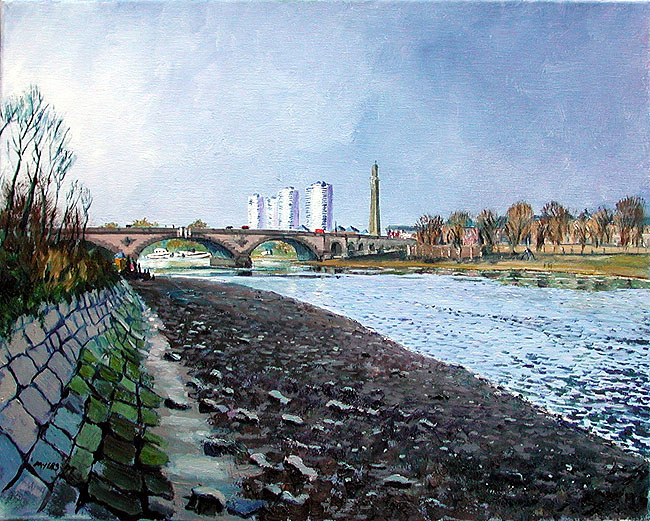