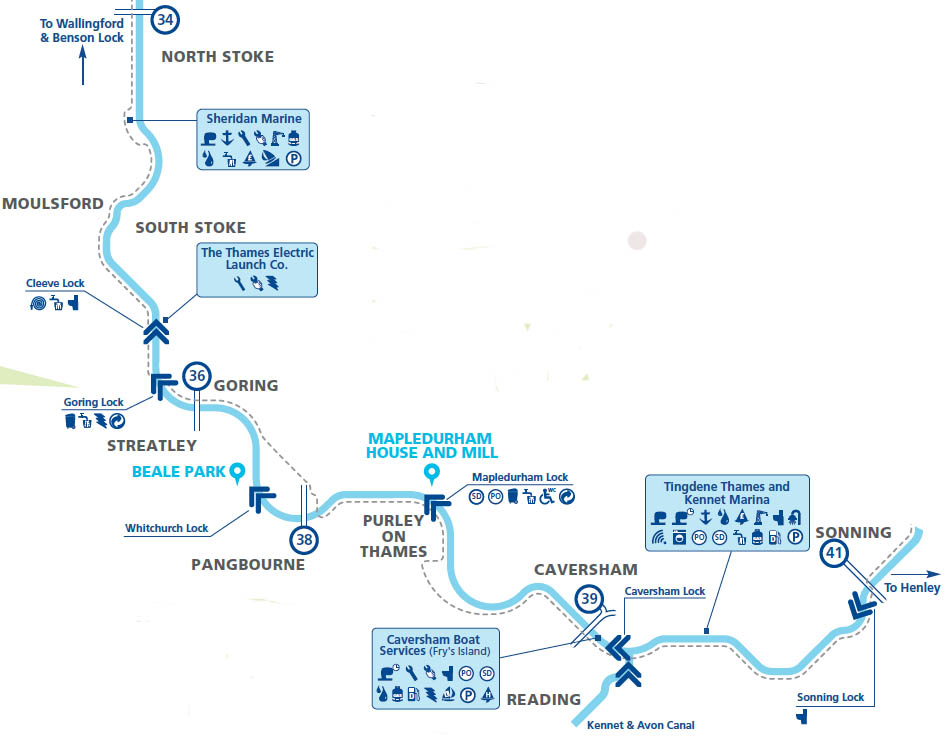 Right bank lock, length: 135'3", width: 18'0"
The Swan (with small Slipway on left bank only just above weir, fee, light craft 0118 984 4494)
NB It is said that this is the only lock on the Thames without pedestrian right of way and access. There is therefore no launching here for small boats -

There are small slipways on both Whitchurch and Pangbourne sides below the lock. See Whitchurch Bridge
1580-5:  Bishop – Whitchurch Lock (ie Weir) belongs to Harry Knappes and is kept by Nicholas Wilford

1786:  An Eye Sketch of the River Thames & flash lock between Whitchurch & Pangbourn taken 21 April 1786 to determine the most proper place to erect a pound lock – 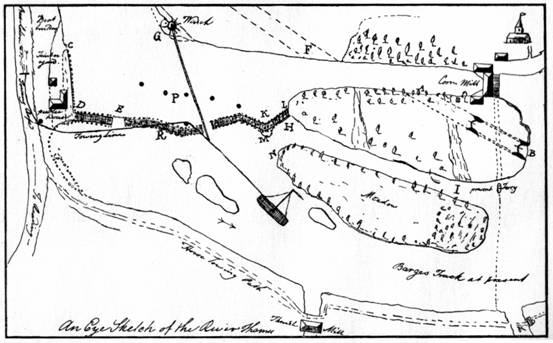 So how did this towing and winching a barge up a weir work? – almost nobody living can have experience of it – so what follows is just guess work –
With a long towline the barge is steered into the bank (bottom centre, with the horse(s) near the weir.
the line is loosed from the horse(s) and carried out over the weir and looped round the roller marked near the opening and then round the roller to the left of the weir and then re-attached to the horses.
The horses then tow the barge so that it approaches the gap in the weir.
Meanwhile a line on a float is towed by boat from the winch into a position such that it naturally floats down through the gap and can be picked up by the barge.
The barge is attached to the winch line and loosed from the horse line.
See Hurley for a picture of an old winch
The winch slowly winds the barge up through the gap – the steering of the barge being crucial!  The breaking strain of the hand made rope will of course not be known.  It was accepted that most lines would not outlast one voyage up the river.  It would of course have broken at the moment of greatest strain when the barge was half way up the weir

1803: Report on a View and Examination of Certain Impediments and obstructions in the Navigation of the River Thames. William Tatham -

Mr. Truss has, with great propriety, complained of the destruction of towing ropes as a drawback on the navigation; and at this place [the 'Water Gallery' below Hampton Bridge] we discover a principal cause of this waste. The persons having the care of this gallery, (I am told under the Board of Works) have been at some pains to save their timber from the friction of the towing rope: certainly, common impressions of moral rectitude, and reciprocal justice, ought to teach them a due guard over their neighbour's property in the protection of their own.
The fact is, that this gallery, as it is called, is raised along the river bank, to secure travellers on the road from the dangers of a dark night; but the economy added to this precaution, has taken care to guard the timber of which the rail is constructed, by a sheeting of iron, nailed on with sharp-headed nails, which do more mischief to the ropes, I fear, than all the remaining friction of the banks. - It is improbable that so eminent an engineer as the gentleman at the head of this Board can have knowledge of this abuse: his mind must revolt at such a piece of wanton destruction of the hard-earned produce of well-bestowed labour; and he would, surely, for his reputation, advocate the cause of the suffering animals, so well meriting the protection of his rank and talents.

Once safely above the weir the horse line is rowed out to the barge which continues on its way.
Going down is simpler – but maybe nerve racking!  The towline has to be cast off in good time with the barge in such a position that it can be steered to shoot the weir.  Below the weir the line must be taken out to the barge and reattached – by whom?  Or did the barge come into the bank – not if it could help it is my guess – because towing a heavy barge off a bank with horses on that same side would be a difficult matter.
When Captain Horatio Hornblower steered a fast passenger barge down the Thames and Severn and Thames to Oxford through several flashlocks it was done without loosing the towline.  (Captain Hornblower and the Atropos, C.S.Forester) Of course this is somewhat thin evidence being fiction – or maybe that was possible on the small flashlocks above Oxford but I can’t see how it could work at Whitchurch in the sketch.

AT Pangbourn the river widens considerably, and the fall of water is so great on the opening of the lock, as to cause much delay in the progress of the navigation 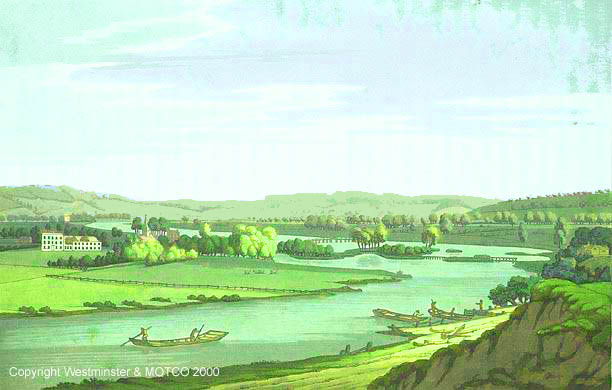 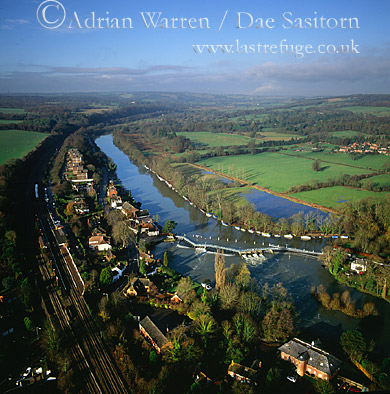 ... the falls of water pouring over, or bursting through, the floodgates of the [flash] lock.

This poundlock is of Oak and very badly and ignorantly framed.

The villages of Pangbourne and Whitchurch, like those of Streatly and Goring, are united by a bridge, a little above which are the lock and weir; the scenery all about this neighbourhood is exceedingly interesting and beautiful — the stream is broad, and the wood-crowned heights that arise on either side add to the view that variety which is especially welcome after so much that is tame and flat, with which the upper Thames so continually supplies us. These low lands, however, have their value, not alone as suggestive of fertility — they abound in the picturesque; of such scenes the poet has happily said — 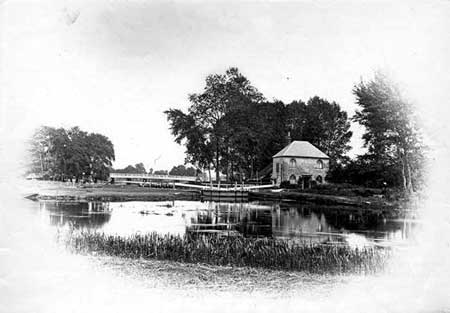 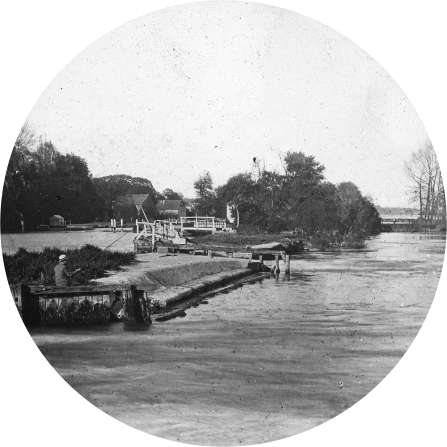 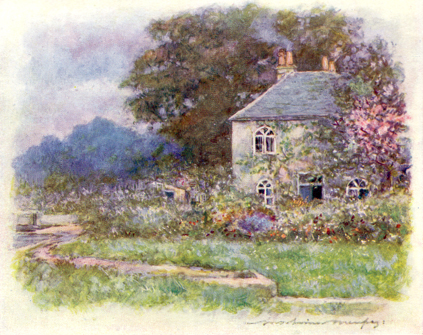 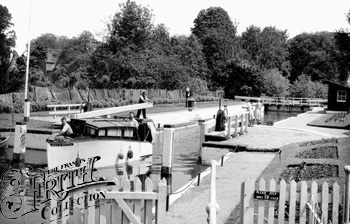