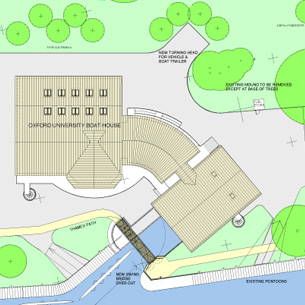 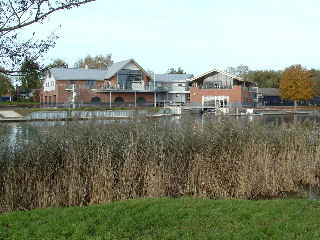 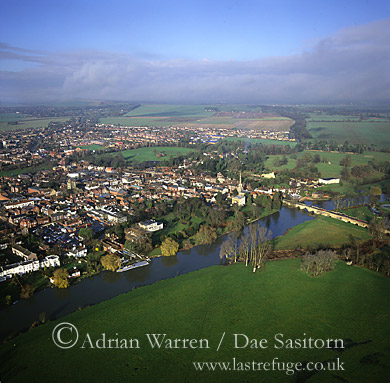 937?:  See the comment on Shillingford Bridge.
1066: William the Conqueror crossed the Thames here
1153:  King Stephen built a strong wooden tower at the foot of the bridge over the Thames.
1250: First stone bridge built by Richard, brother of Henry III.
1344:  Grant of pontage (dues payable for crossing) The structure threatened to become a ruin.
1530: Leland: 'A large thing of stone over the Tamise' Extensive repairs were made in this year.
1633:  The Navy Authority complain that no barge wider than 16 ft 4in. could pass.
1646:  During the civil war four arches were removed and wooden drawbridges substituted.
1671:  In one of the plague years we hear of wardens being 'set at the bridge to keep out all Crowmarsh and Newnham people out of Wallingford'.
1692:  Baskervile:- Wallingford Bridge is 310 yards over & has 19 Archs
1751:  The civil war damage was made good. The four removed arches were rebuilt in brick with stone facing.
1792: Samuel Ireland -

The antiquity of the bridge, from its appearance, seems to vie with the oldest structure of the kind on the Thames : it is truly Gothic, and of immense strength. The pointed angular sterlings on the upper side are so well constructed, as to be capable of resisting the most violent torrent of water from the winter floods. 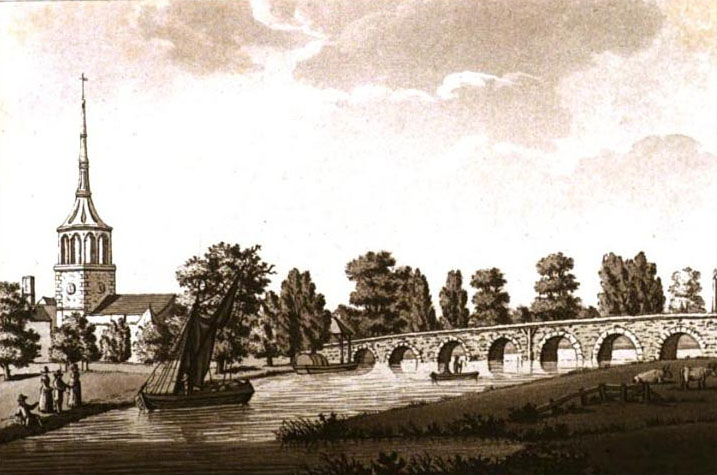 The spire of the church was built about eighteen years since, at the sole expence of the late Judge Blackstone; and, though singular in its taste, is not an unpleasing object. 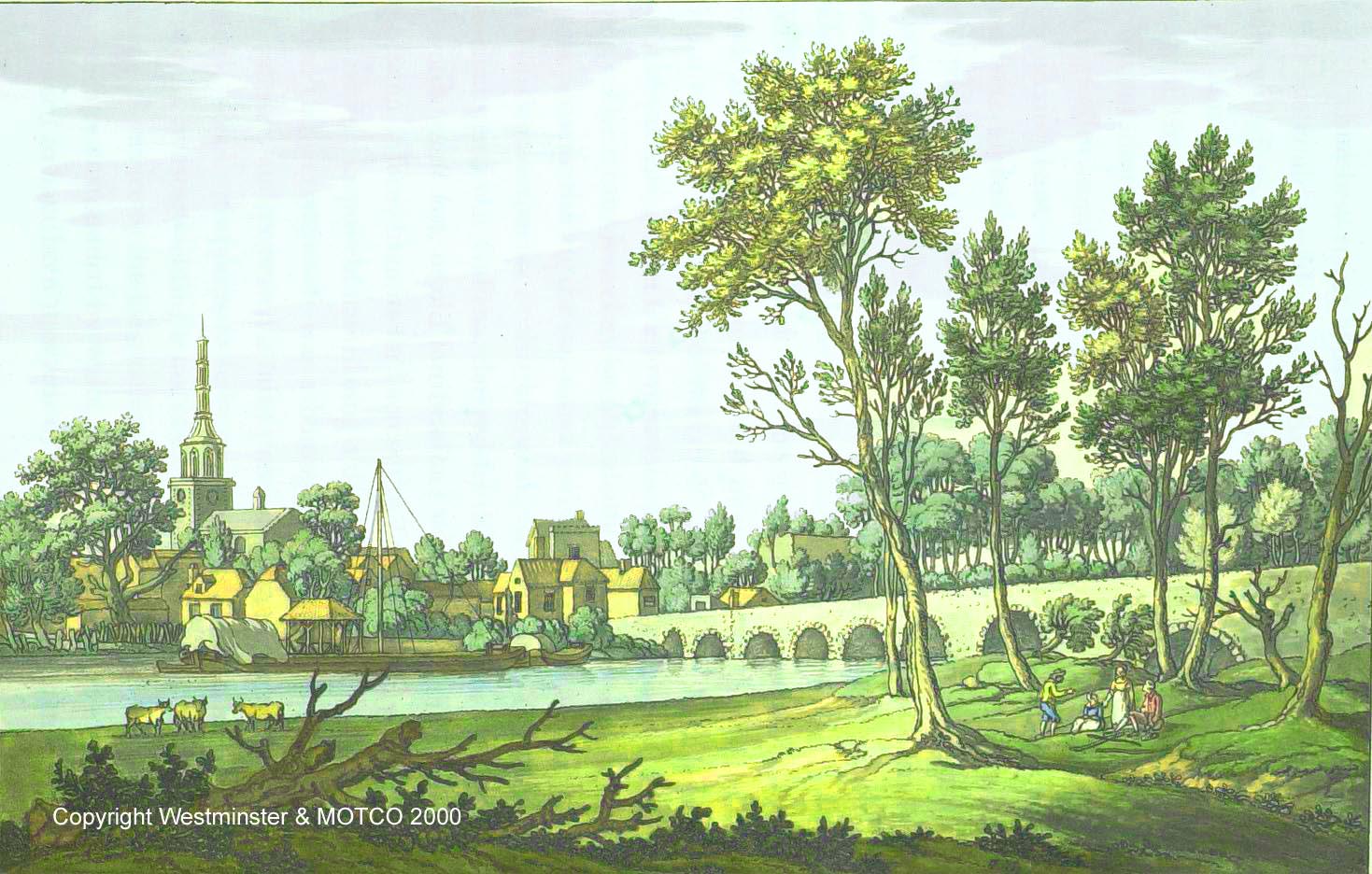 1809: Five arches were so damaged by flood that they had to be rebuilt.  They were replaced by three wider arches. At the same time the bridge was widened by adding about seven feet on its north side and a toll house erected midway across the bridge.
1812: Wallingford Bridge during the rebuilding from Havell's "Picturesque Views of the River Thames" (Black & White copy in "The Story of the Thames" by J E Vincent) - 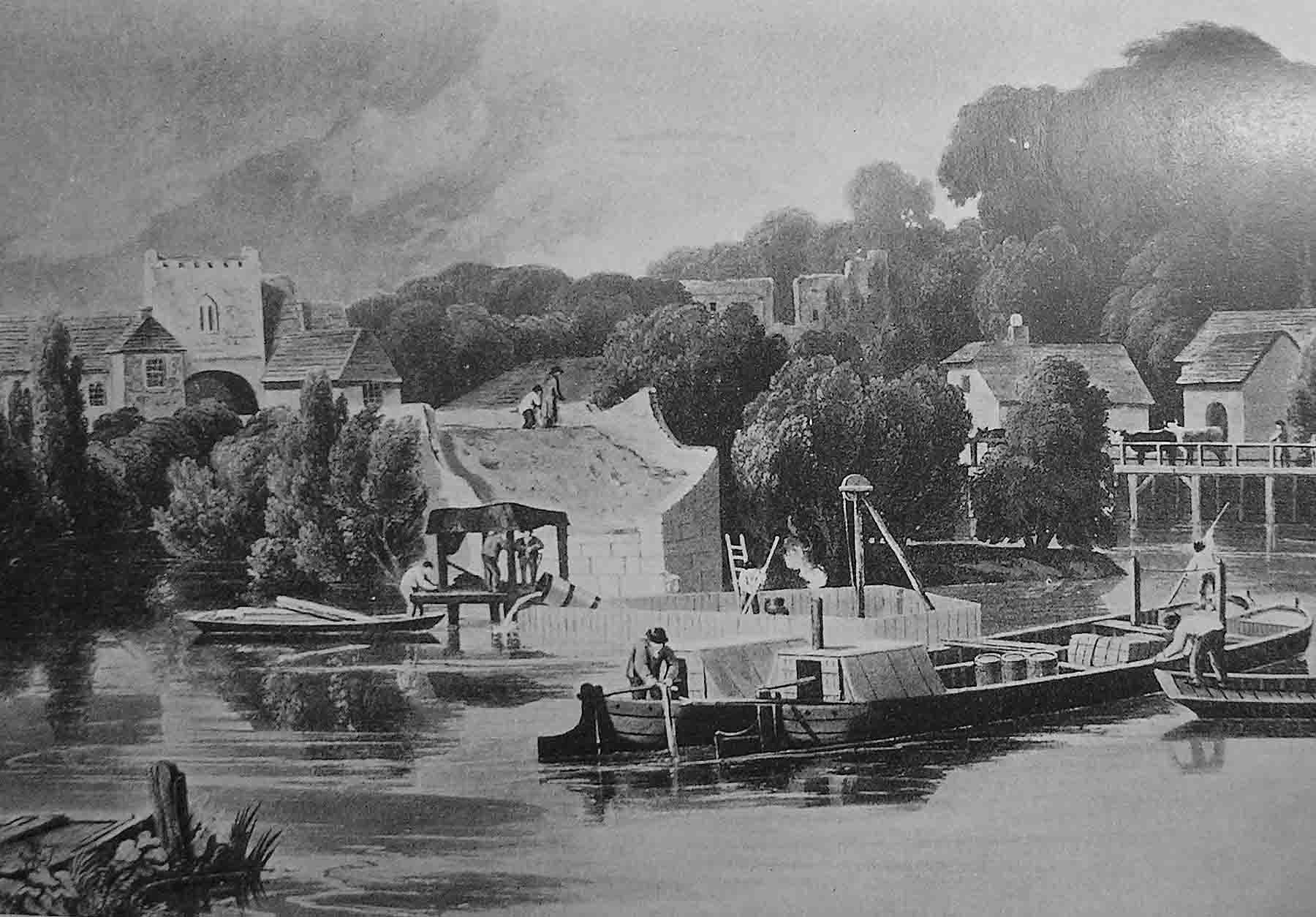 In the above fascinating picture various things stand out -
I think the two men on the temporary platform to the left of the pillar foundation are operating a handpump. The output of the pump can be seen cascading into the river.
The two men inside the pillar footings are working on the foundations with a simple rope and pulley to lift stones from boats and lower them into place.
The two barges have as their sole means of propulsion one punter. Presumably they would have been normally towed by horses (or men) and in the picture are simply manoeuvring near the building works.
On the right is possibly a temporary bridge with cattle being driven across. 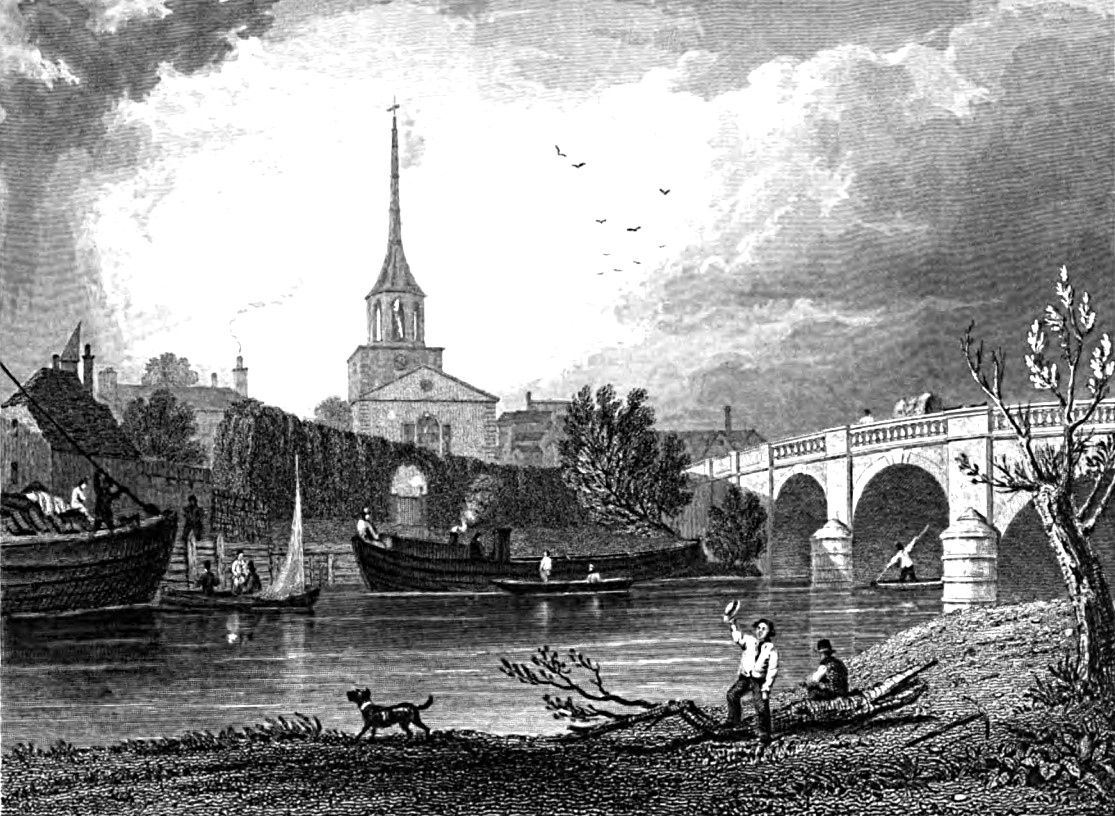 Wallingford was famous in its day: the British, the Romans, the Saxons, and the Danes, had each and all their settlements there; it was a borough in the time of the Confessor, and had a mint before the Conquest. *

We engrave here the silver penny struck at Wallingford by Edward the Confessor. It is a type of the utmost rarity, and is preserved with other scarce Saxon coins in the Bodleian Library. By comparing it with the Oxford coin of Alfred, which we have also engraved, the progressive improvement in the English mintage will be apparent — a neater and truer character prevails in those of the Confessor, indicative of more peaceful times. Indeed, the coinage of England tells in some degree the history of the country. The rude monies of the Heptarchy seem only fitted for barbaric need; and it is not until the amalgamation of the Saxon kingdom under one sovereign that a great improvement takes place. The rude heads of early kings on our coins seem scarcely human; but this of Edward the Confessor exhibits truthful features. In the troublous times which succeeded the death of the Norman Conqueror, the national currency lapsed into its old barbarism, and it was not till the era of Edward I. that it recovered itself. We must refer to the Reading penny, engraved under our notice of that town, as an example, and to the note appended, for a continuation of these remarks.

Traces of [ Wallingford's ] ancient walls and castle may still be obtained by the patient searcher; the latter is described by old historians as "impregnable", but "Time, the destroyer", has effectually removed all its strength except a few indications, which consist of rubble and stones. In the time of Leland it was '' sore in ruines, and for the most part defaced". Camden described it as "environed with a double wall and a double ditch; the citadel standing in the middle on a high artificial hill". It must have been of immense size and strength, and was perhaps, as it was said to have been, "impregnable" before

Villanous saltpetre had been dug
Out of the bowels of the harmless earth.

During the civil wars, when King Stephen and the Empress Maud contended for England, the lady was here besieged by her enemy; but all assaults were vain, until famine came to the aid of the besiegers. Her son, afterwards Henry II., arrived at the seat of war just in time to save his heroic mother; but a conference took place on the river's bank, when it was resolved that Stephen should possess the crown during his life, and that Henry should succeed him.
Of its "fourteen parish churches" Wallingford retains only three, one of which was "erected at the sole expense of that eminent lawyer and learned judge, Sir William Blackstone. "Notwithstanding its comparative decadence, however, Wallingford has the aspect of a cheerful and thriving town." *
* Camden mentions his having frequently visited it in his academic character, and that it then retained a considerable portion of its ancient grandeur.
The approach to it is particularly pleasing — the plainer features of the place being happily hidden by a profusion of foliage on the noble trees that line the banks of the stream. 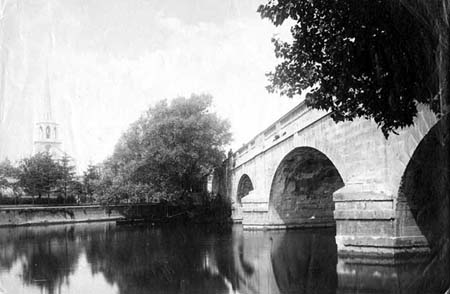 Wallingford Bridge is a good old stone one, but the gas-works and spire of the church spoil the effect of the bridge, and give a taint of ugliness to the place, which the fine old town itself does not deserve.

Against the bridge rises the tall and unutterably inelegant spire of St Helen's Church, the hideous product of a mind unhappily diverted from law to ecclesiology ...
St Peter's is the burial-place of Sir William Blackstone, one of the judges of His Majesty's Superior Courts at Westminster, and Recorder of Wallingford, who built the flint tower, with its uncomfortable spire - both monuments of the architectural decadence - and died in 1780 ...
It is charitable to suppose that his lordship's legal acumen was superior to his architectural taste.

1886: Julia Isham Taylor: "Down the Thames" writes as an American:

Have we anything, though, in this new world so delightful to the eye as the rural English bridges?
I can think of nothing to compare with those low reposeful arches of dark moss-smeared stone rising from the shallow meadow streams, their every line in rhythm with the sluggard water and the placid fields.
They are the very epitome of English pastoral.

Our resting place for the night was Wallingford, a town with much history and little to show for it ...
A band kept on playing while we ate our tea with a party of flannelled record-breakers who were in fine spirits. They blew their own trumpets almost as loud as the cornets outside because they had sculled twenty miles since morning.
"Not bad for the first day out, by Jove, you know!"
"Twenty miles," said Joseph, not in the least impressed; "Why, we may have come only eight by the map, but it was full twenty and a half by [our] steering."

[ If I may sound my own trumpet, since no one else will, I have managed twenty four miles a day, punting. ] 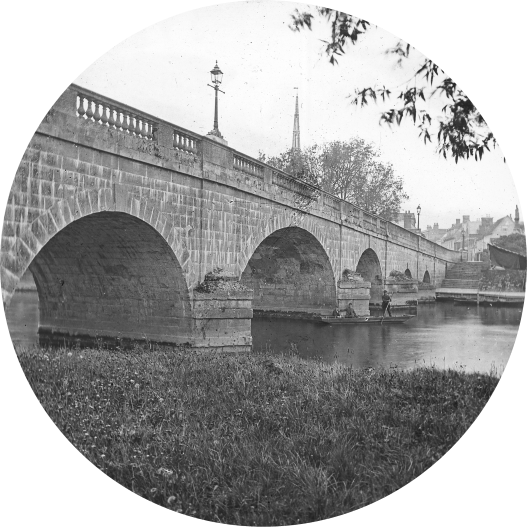 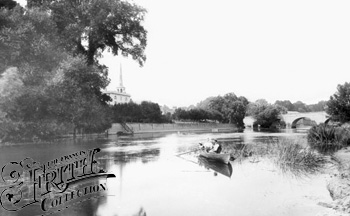 The bridge is fair, and, seen from below, where a weeping willow falls softly over one bank, the view is pretty. 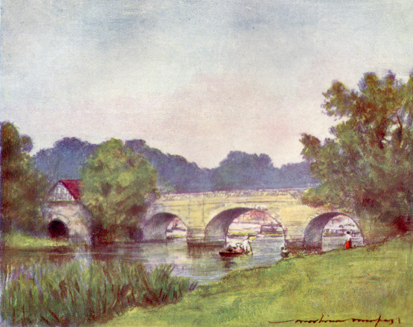 1912: The south wall was buttressed between arches No.5 and No.8, and a flight of steps leading to the meadow on the north side was built.

Wallingford Bridge on the site of an old Saxon ford or wooden bridge. First stone bridge built about 1250 by Richard, brother of Henry III. Four arches (one blocked) of this bridge still exist.
In 1530 extensive repairs carried out.
In 1646 four arches were removed and wooden drawbridges substituted during the siege of Wallingford; but in 1751 these four arches were rebuilt of brick with stone facings.
In 1809 five arches, damaged by floods, were taken down and three wider arches erected in their place; also the whole bridge was widened 7 feet on the north side and the toll-house erected midway across the bridge.
In 1881 the toll-gate was removed.
In 1912 the south wall was buttressed between arches No.5 and No.8, and a flight of steps leading to the meadow on the north side was built.
The Mary Grace, an ancient chapel over the west end of the bridge, was partly demolished during the Civil Wars, and its ruins, as an embattled building over the bridge, are shown in several prints prior to 1809.
Wallingford Bridge appears to be entirely adequate to meet the present volume of traffic, and by reason of its beauty and historical interest it should be preserved.
Note. - There is a flood-mark on the bridge just below the crown of the arches indicating the high-water mark in 1894.
It should be pointed out that if the bridge were again widened it would necessitate also the widening of the High Street, which is most undesirable. As the bridge is, however, limited to vehicles of ten tons, some consideration should be given in the future for an east-and-west by-pass and new bridge elsewhere that will carry loads greater than ten tons. There would appear to be no necessity at present for this project to be carried out. 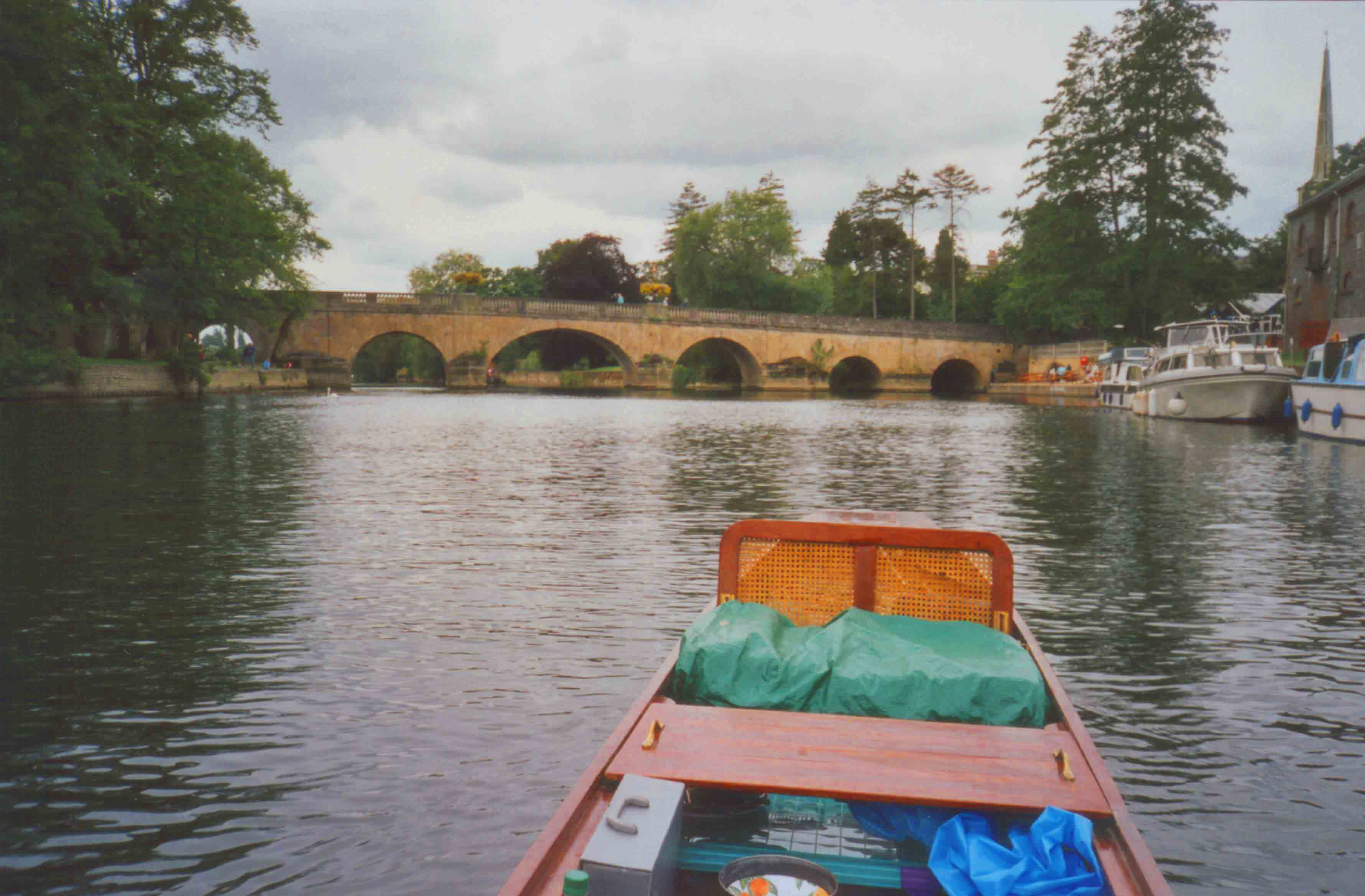 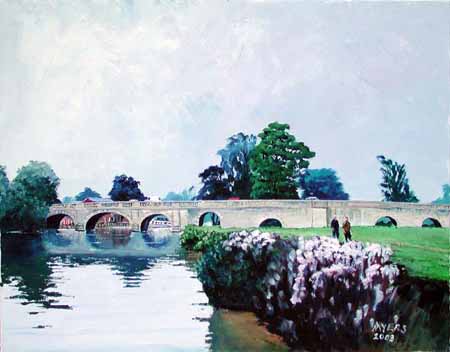 The Church of St Peter at Wallingford contains the bones of Sir William Blackstone who was buried there in 1780.  An unkind tradition accuses Sir William of the design and erection of St Peter's fearfully mean looking spire, but we made it a point to be skeptical about this legend.

A conspicuous feature is the steeple of the church near, looking as if it had been joined on to the body without any thought of continuity of style.

There was (maybe) a slipway above the bridge on west bank next to the BoatHouse. There are now 5 substantial bollards preventing access.

The river here being narrow, and not very deep, I am sometimes puzzled to know where all the water has gone to, as the stream is not particularly strong, and there are immense volumes of water just above Benson lock, and plenty down below Moulsford.
A fine baronial sort of residence built of red brick, standing in a small park, skirts the Oxfordshire shore between Wallingford and Benson.

Wallingford Castle Meadows covers some 16.6 hectares on the banks of the River Thames in Wallingford. The meadows contain the site of Wallingford Castle which has a long and complex history. All that remains of the castle are two sections of wall which are Grade 1 listed and the bank and ditch earthworks which form part of the Scheduled Ancient Monument.