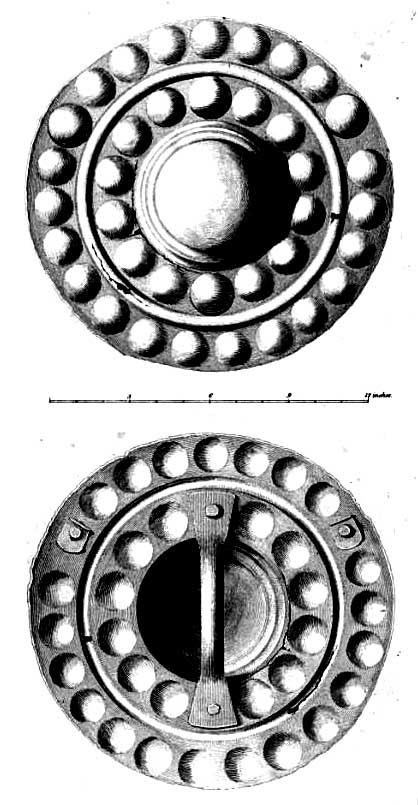 I now have the pleasure of submitting the drawing of a little round Buckler, recently added to the collection of Antiquities in the British Museum ...
This Buckler is of bronze or metal, measuring in diameter fourteen inches by thirteen. It is ornamented with two series of round bosses, between raised concentric circles, having a large boss or umbo in the centre. All the bosses are punched in the metal excepting four, two of which form the rivets to the handle within, and two are the rivets to the metal extremities apparently of a strap, these four bosses being consequently moveable.
This interesting object was found in the month of October 1836, on the lower margin of the pool of the Little Wittenham or Day's lock upon the river Isis, about half a mile above the junction of that river with the Thame stream, midway between Little Wittenham bridge and the weir connected with the lock, about one mile to the westward of Dorchester, in Oxfordshire, a hundred and fifty or two hundred yards from the western end of an earthwork, called Dyke hills, and three quarters of a mile from the intrenchment upon Sinodun or Little Wittenham hill.

1580-5: a weir at Little Wittenham kept by William Dunshe.
Robert Gibbings gives an alternative name for Wittenham Clumps as "Mother Dunch's Buttocks"
Perhaps lock keeper William's wife had some memorable feature or other which gave rise to this?  One imagines that the bargemen might have delighted in thus perpetuating her memory. Elsewhere I have seen it explained that it was the wife of the Lord of the Manor whose attributes were thus remembered.

The view of the river at Day's Lock, in combination with the hills in the background, forms one of those characteristic "bits" of river scenery that our landscape painters love.
The view from the hill is very fine, and the remains of the earthwork fortification round the second hill (consisting of a perfect ditch, &c.), said to be Roman, are interesting. 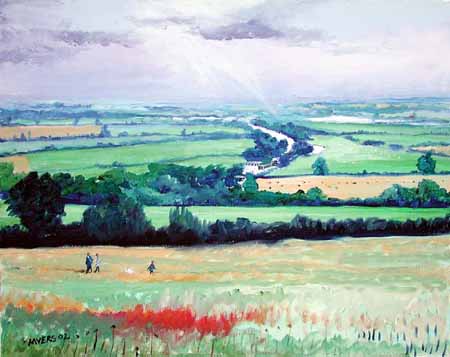 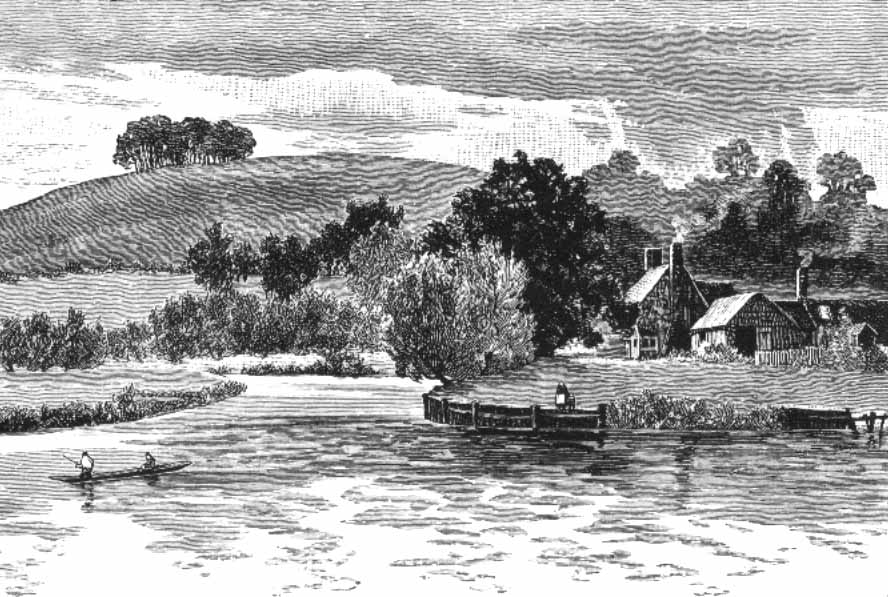 The hill on the LEFT bank, visible for miles, is Wittenham Clumps.
(Robert Gibbings, in addition to "Mother Dunch's Buttocks", gives the alternative name "Maiden's Breasts"
[ seems to me a theme might be developing here?] ]

6000BC: There is a wealth of evidence for occupation and activity on the hilltop from 6000 BC to the medieval period. The earliest evidence for occupation was provided by a scatter of flints left by Mesolithic hunter-gatherers
4000BC: flint tools, including an arrowhead, show that Neolithic farmers also visited the site between 4000 and 3000 BC.
1000BC: A previously unknown hilltop enclosure ditch, identified by English Heritage geophysical survey in 2002, was investigated in several trenches and was firmly dated to the Late Bronze Age (around 1000 BC).
The substantial defences of the Iron Age hillfort that replaced it were investigated for the first time, and contemporary pits and burials in the interior yielded a wealth of information about the lives of the Iron Age inhabitants.
The excavations also revealed copious and unexpected evidence for late Roman settlement and burial on the hilltop, and also medieval pits suggesting possible occupation in the 12th/13th century AD.

Manchester, June 13, 1772
MY WORTHY FRIEND,
Another great object was, to see the two famous hills near Dorchester, commonly called Mother Dunch's Buttocks, and the celebrated Dyke-hills.
And here I was remarkably happy in finding my notions of both so coincident with the nature of both, and both so finely taking the place which I had assigned them. In the 'History of the Roman Conquests', Dr. Stukeley has made the Dyke-hills into a British race-ground ; but the very site of them directly refutes the supposition, and they are evidently military entrenchments.
Here, at Dorchester, I met with a very surprising person in the clerk of the parish, a man that, in the low occupation of a joiner, shews a wonderful genius for Antiquities, pointed out to me many curious notices relating to this Roman town, and has even collected six or seven hundred Roman coins. Amongst these he has two or three that are certainly British, and one or two more that are conjecturally so ; and he shewed me a small Roman curiosity, in copper, which he called an ink-horn, but which I found to be a lamp.

If there is one thing upon which English rural poets agree it is that Wittenham Clumps is worth writing about!
1777: Horace Walpole to Lady Ossory -

Though your ladyship would persuade me to cast my slough, I assure you I am not without flatterers of another sort, who encourage me in my Tom-Hearneality.
I have just received a poem called Wittenham Hill, in which I am hailed as a father of ancient lore!
I can't find the poem but have come across the name Bligh Bew

1875: In "A collection of original poems" Emily Cozens, William Payne -

A steep entrenchment Castle Hill surrounds,
Once thrown up as a barrier to the foe;
Fine beech trees crown the summit's grassy mounds,
Upon its slopes the pleasant corn fields glow.

What time those trees were planted, by whose hand,
A hand long vanished in the buried past,
Or by whose care these clumps of trees were planned,
We know not; over all is shadow cast.

The long-closed record opens on a page -
A page that dates a thousand years ago;
And to our memories recalls that age,
When Danes o'erspread the land with fear and woe.

It tells on Morton's plain, how Saxons fought
Against the Danish pirates, long and well;
That victory the invading chieftains wrought,
And there King Ethelred the Saxon fell.

To Sinodun they bore him from the strife,
He lingered until past the Easter morn,
Then fled the last faint glimmer of his life,
He left the crown King Alfred to adorn.

And Sinodun and Castle Hill still stand,
Not now required for any monarch’s camp;
No war cries shrill disturb the peaceful land;
No sound is heard of warrior's hostile tramp.

The river Thames flows peacefully below,
A neighbouring wood adds richness to the scene,
The village churches in the distance show,
And beauty o'er the landscape reigns supreme.

1844: Joseph Tubbs, of Warborough near Dorchester, carved the following poem on the Poem Tree.  He left his notes on it to his nephew, who died at the age of 100 in 1949 and left the notes to Reading Reference Library. 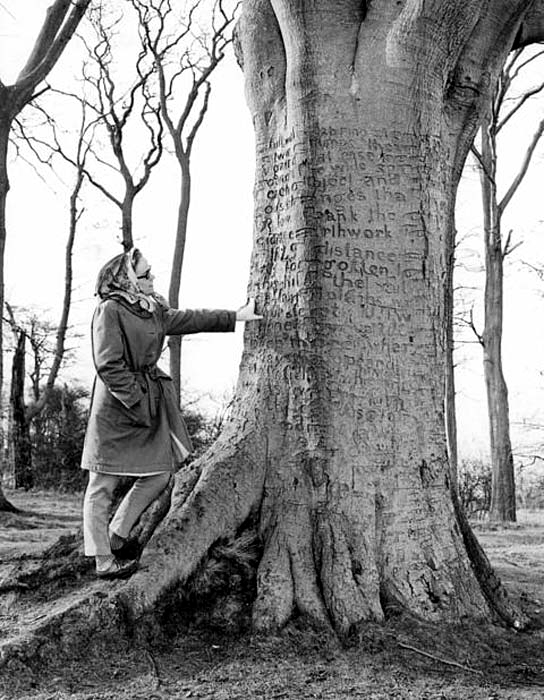 1965: Dr Henry Osmaston took a tracing of the poem.
1995: a plaque reproducing the Osmaston tracing, located close to where the tree stood, was unveiled to commemorate the 150th anniversary of the poem. 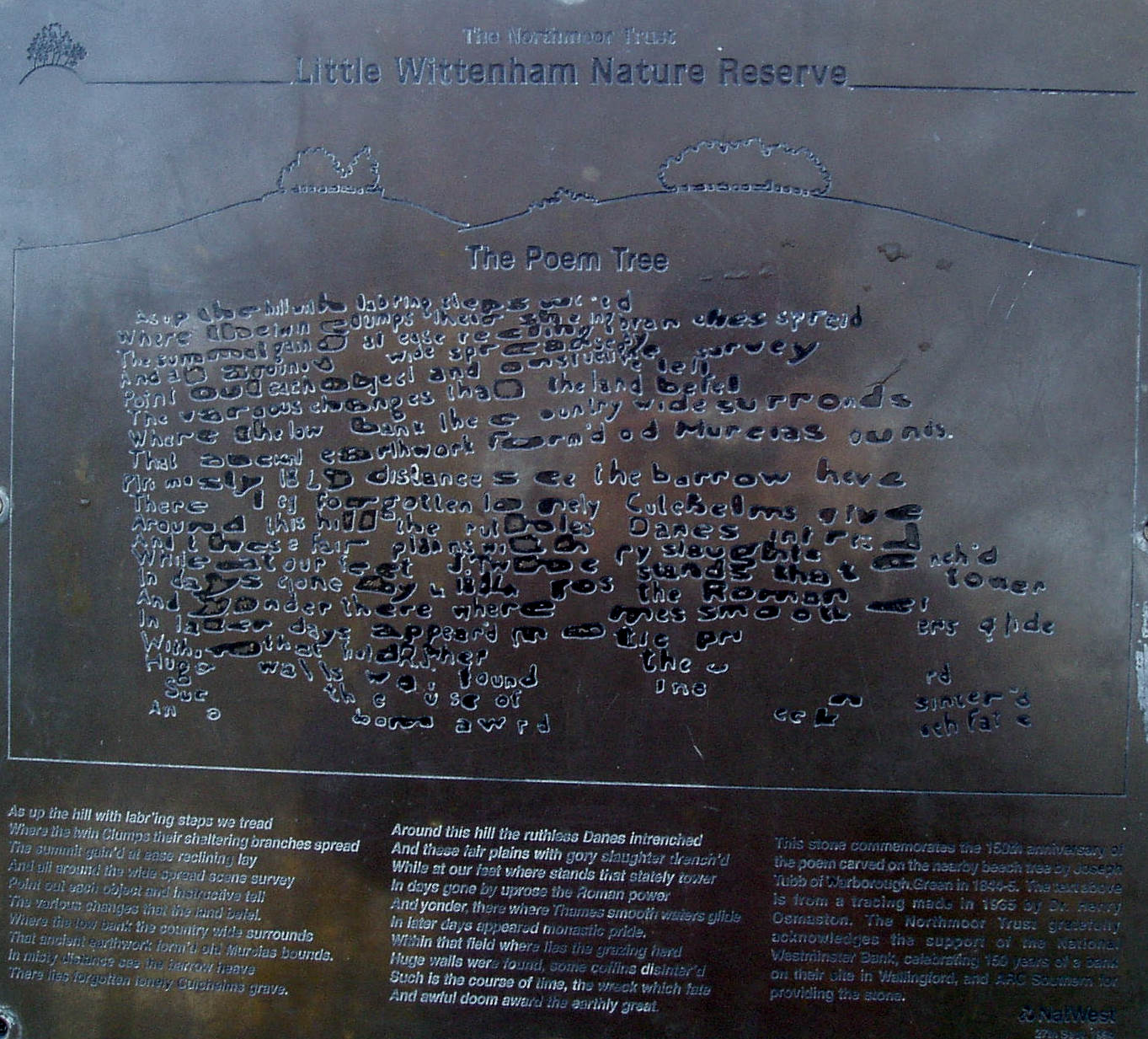 I have adopted his best line as my title: Where Thames Smooth Waters Glide
Listen to 'As up the hill ...'

As up the hill with labr'ing steps we tread
Where the twin Clumps their sheltering branches spread
The summit gain'd, at ease reclining lay
and all around the wide spread scene survey
Point out each object and instructive tell
The various changes that the land befel.
Where the low bank the country wide surrounds
That ancient earthwork form'd old Murcia's bounds.
In misty distance see the barrow heave,
There lies forgotten lonely Culchelm's grave.

Around this hill the ruthless Danes intrenched,
and these fair plains with gory slaughter drenched,
While at our feet where stands that stately tower
In days gone by, uprose the Roman power
And yonder, there where Thames smooth waters glide
In later days appeared monastic pride.
Within that field where lies the grazing herd
Huge walls were found, some coffins disintered
Such is the course of time, the wreck which fate
And awful doom award the earthly great.

Sadly, the Poem Tree toppled in recent years. The tree died in the 1990s but had been safely left for visitors and as a habitat for wildlife. Unfortunately once the base completely rotted, fluctuating weather conditions proved too much for the ancient trunk. The Poem tree was found leaning precariously onto a nearby hawthorn tree, and had to be quickly winched to the ground in order to keep the area safe for visitors.
The famous Poem Tree now lies in pieces as nature intended; the deadwood will provide valuable habitat and nutrients to the surrounding area. The Poem Tree is sorely missed by the Earth Trust team and, we are sure, by all that have visited this magical piece of natural history over the years.

The Poem Tree by Susan Small

2020: Thanks to Rosie Southon of Dorchester on Thames who has added two more verses. She says:

When climbing the Clumps, I can still see much that Joseph described, but also plenty that has appeared since. Until recently, the main modern landmark was Didcot’s cooling towers. I see an analogy between their collapse and that of Tubb’s carved Poem Tree. The towers and their passing also prompt thoughts of our own place in the landscape and our effect on the world. While walking I often wonder what lines Joseph might have composed if he were accompanying me. I imagine that after our stroll, Joseph, with mallet and chisel in hand, would enthusiastically seek out a small tree and carve two new verses – after some prompting from me.

Below us cows wander on Isis’ green field
Sinuous Thames old Berkshire’s bounds does yield
Red shines the Abbey roof beyond the flocks
Grazing Dyke Hills, saved by Colonel Lane-Fox
And from our high place we consider our fate
It’s said the threat to our birthright is great
Lashing rains flood, scorching suns bake to dust
Preserve our landscape – as stewards we must
We know the damage we carelessly made
Act we must, lest our legacy should fade

William Morris:
Listen to 'In this sweet field ...'

In this sweet field high raised above the Thames
Beneath the trenched hill of Sinodun
Amidst sweet dreams of disembodied names
Abide the setting of the August sun,
Here where this long ridge tells of days now done;
This moveless wave wherewith the meadow heaves
Beneath its clover and its barley-sheaves.

Across the gap made by our English hinds
Amidst the Roman's handiwork, behold
Far off the long-roofed church the shepherd binds
The withy round the hurdles of his fold
Down the foss the riverbed of old,
That through the long lapse of time has grown to be
The little grassy valley that you see.

Rest here awhile, not yet the eve is still,
The bees are wandering yet, and you may hear,
The barley mowers on the trenched hill,
The sheep-bells, and restless changing weir
All little sounds made musical and clear
Beneath the sky that burning August gives,
While yet the thought of glorious Summer lives.

Every one who journeys from London to Oxford by the Great Western Railway knows the appearance of the famous Wittenham Clumps, a few miles from historic Wallingford. If you ascend the hill you will find it a paradise for antiquaries. The camp itself occupies a commanding position overlooking the valley of the Thames, and has doubtless witnessed many tribal fights, and the great contest between the Celts and the Roman invaders. In the plain beneath is another remarkable earthwork. It was defended on three sides by the Thames, and a strong double rampart had been made across the cord of the bow formed by the river. There was also a trench which in case of danger could have been filled with water. But the spoiler has been at work here. In 1870 a farmer employed his men during a hard winter in digging down the west side of the rampart and flinging the earth into the fosse. The farmer intended to perform a charitable act, and charity is said to cover a multitude of sins; but his action was disastrous to antiquaries and has almost destroyed a valuable prehistoric monument.